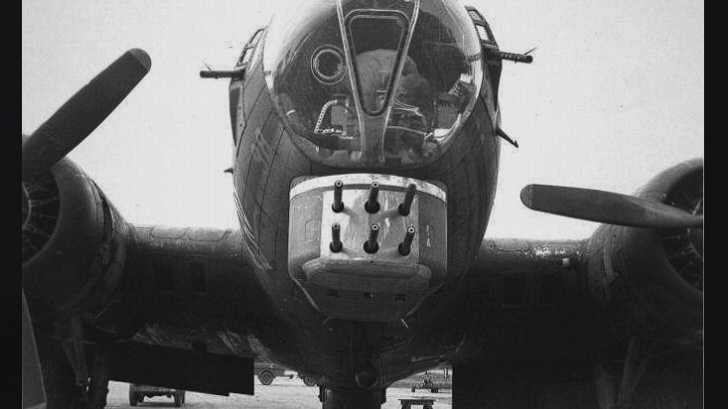 A B-17G piloted by Richard L. Maggart took off from RAF Manston to escort other bombers and bring down a German weapons complex in France. Despite being 23 years old, this was Maggart’s 23rd mission as a B-17 pilot.

His Flying Fortress had the words “West End” on its nose. Under it are experimental chin turrets containing six machine guns controlled by the pilot. Furthermore,  two .50-cal machine guns were mounted on the side of the nose. In total, this B-17 had 17 .50-caliber machine guns.

Maggart’s B-17 was struck by Flak as it entered France. When three German planes aimed to finish the bomber, they were surprised to see its new modifications. Maggart fired his guns and destroyed the first Fw 190. The second plane decided to retreat, but Maggart managed to shoot it down. Unfortunately, the third plane managed to escape by pulling up where the machine gun couldn’t reach.

Another Flak hit the outboard engine on the portside wing, yet the bomber remained airborne. Six more Fw 190s attacked the Flying Fortress, with four of them in tight formation. By firing a quick burst, Maggart downed two planes in front. However, an Fw-190 tore its portside stabilizer and landing gear while another Flak took out its third engine.

Maggart shut off all the engines to prevent a fire and miraculously flew the B-17 back home with just a single engine running. All nine members of his crew landed safely in Kent.