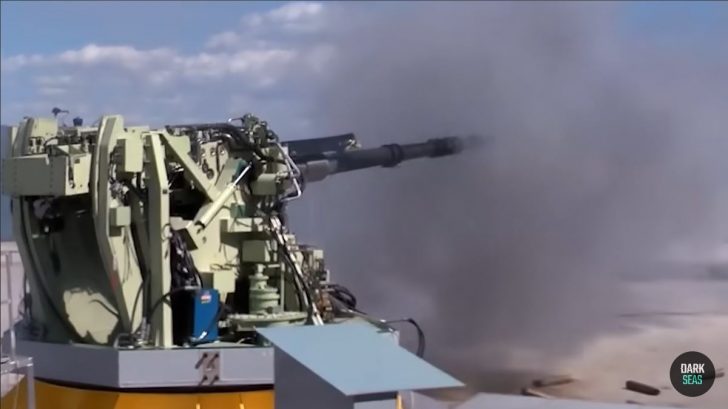 The impressive OTO-Melara 76 mm naval gun was designed by the Italian defense company of the same name in the middle of the Cold War.

The cannon was highly successful from the start. However, it is said that the compact has accuracy and reliability issues with its maximum rate of fire. Despite its desirable qualities, it still had a number of deficiencies prompting the company to resume design studies for a more advanced model.

The Super Rapid addressed the problems of its predecessor, enhancing accuracy by decreasing the weight of the moving parts, and reducing vibrational problems. Although similar to the Compact’s rounded design, the Super Rapid is tougher.

Its mounting is strengthened to resist overpressures twice the rate of its predecessor at once kilogram per square centimeter. Moreover, its rocker arms were crafted in high-grade titanium steel.

In 2004, the Italians developed the newer Stales System which can fire DART ammunition. The weapon can also counter a number of subsonic missiles up to 8,000 meters away.

The 7662 Sovraponte or “Over Deck” in English is the newest version of the compact and lightweight mount for the gun. It’s 30-40% lighter than the standard Super Rapid and does not require penetrating the deck below for installation.

The Super Rapid is still current up to this day. Based on such incredible ranges, a single gun could deal with as many as four subsonic sea-skimmer missiles, arriving simultaneously and apart from each other at 90 degrees. The gun can also fire a guided round that can reportedly destroy anti-ship missiles.

Furthermore, it can carry a much bigger supply of ready-service ammunition, allowing the cannon to fire longer bursts without requiring reloading.

The OTO-Melara became one of the most popular naval guns, even taking into account US and Russian-made systems. Reportedly, the company had about a thousand examples of both Compact and Super Rapid cannons in service- an unparallel 60 navies around the world.