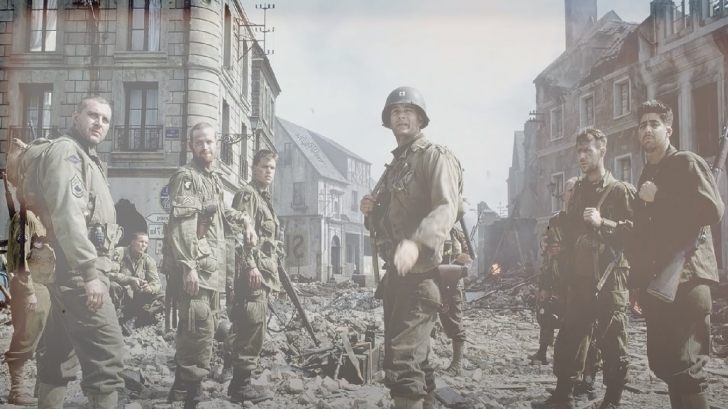 The French government refused to give permission to film on the beaches of Normandy. The sequence was instead shot in Ireland.

2. Based Casting On WWII Footage

Spielberg argued that the boys before looked like men, unlike today, where we all look innocent. Therefore, he based his casting on faces in newsreels.

He reduced the movie’s saturation by 60% to give it a realistic and gritty feeling. Some cable providers later reverted the change after some complaints.

Neil Patrick Harris was initially considered to play the role of Private Ryan.

The sound effects were from recordings of authentic WWII weapons, adding to the film’s realism.

Spielberg requested that his film be played at the highest possible volume to accentuate its realistic sound effects.

The film used up 40 barrels of fake blood to showcase the carnage and destruction at Omaha Beach.

Of the 1,000 extras on set, many were members of the Irish Army Reserve.

About 20 to 30 amputees were given temporary prosthetic limbs to simulate losing body parts in war.

11. Won An Award With An Outdated Editing System

It is the last film to use a non-digital editing system to win an Academy Award.

The movie was filmed in under 59 days. 25 of those were devoted to the Omaha Beach scenes.

After the movie’s success, Spielberg gathered the same creative team to make the Medal of Honor game franchise.

14. A Voice Actor Dropped Out

One of the German voice actors was actually present during D-Day. He had to drop out of production because it gave him terrible flashbacks of the war.

The exception is given to films that would usually get an NC-17 Rating. These were only awarded if the work and message outweighed the violence shown in the movie.

16. Actors Were Sent To BootCamp

Most of the main cast went to a grueling boot camp that included camping in wet conditions and only calling each other by their characters’ names.

Department of Veteran Affairs set up landlines in anticipation of the movie’s release to help veterans suffering from PTSD.

18. Set Was Built For Four Months

The city of Ramelle was built at the Hatfield Aerodrome, 30 miles outside of London.

A famous miniseries called Band of Brothers reused the set at Hatfield Aerodrome.

The term was used during WWII to describe something that is “F***** Up Beyond All Recognition.”