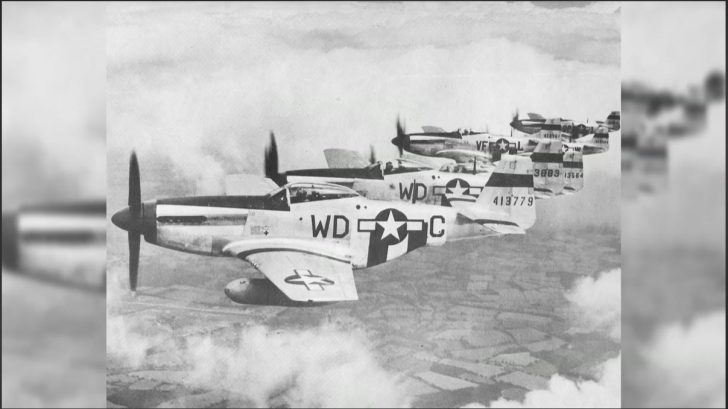 Lt. John M. Carothers was in his P-51 Mustang returning home from a bombing run in Berlin. He was part of the 503rd fighter squadron and the last escort left in his entire formation. Suddenly, he was radioed informing him that six Focke-Wulf 190s were heading straight in their direction.

Carothers and his squadron still had to wait at least an hour for the RAF Spitfires to escort the remaining B-17s to safety. Being the last escort left, they somehow had to survive the attack from the Luftwaffe.

Knowing that his bombers are low on ammunition, Lt. John knew that he was their last hope in returning home. Thus, he turns his plane back engaging with the fighters.

Carothers managed to take down two enemy fighters. However, the remaining four FW-190s opened fire at him, tearing the whole side of the wing, and leaving him unconscious for minutes.

When he woke up, he was at 45,00 feet and the enemy planed stalled out. When he reached for the radio for help, he realized it was destroyed and he didn’t have enough fuel to make his way home.

Realizing that it was most likely the end for him, he took his logbook out to record the incident and wrote a small note to his family. He then pushed down, and empties his entire ammunition on one Focke-Wulf, cutting the plane in half. Carothers’ plane then crashed on the North Sea, killed in action.

Because of Lt. John’s heroic efforts, 160 men would return home safely that night.

Robert Anlauf, an ace pilot of the Luftwaffe, was moved by the latter’s actions, and would later write to the RAF, “He could have gone home, but he decided to come back, taking on all six of our aircraft to protect his B-17s.”