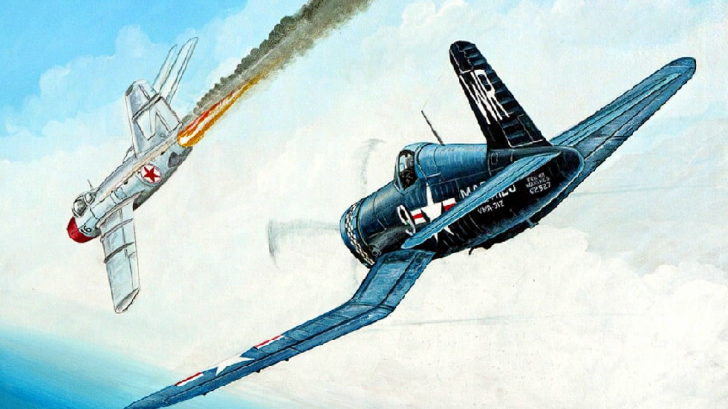 MiGs In The Distance

At 4:10 PM on September 10, 1952, Captain Jesse Folmar and his wingman Lt. Walter Daniels were ordered to attack a troop concentration on the south side of the Taedong River. As the two entered enemy territory, they began to execute a tactical weave at 10,000ft. The pair patrolled over the Taejon estuary and observed no activity in the area. However, during a bank over a small island off the coast, Folmar saw two MiG-15s closing in. The two Soviet planes were trying to set up a firing pass on the two unsuspecting F4Us.

Folmar noticed the loose formation of the MiGs and opted to steepen the angle of his banking turn into them. He had to let go of his fuel tanks and all external ordnance to gain more speed. Seconds after the encounter, Folmar spots two more MiGs closing in from his eight o’clock. Suddenly, he saw tracers from the MiGs overshooting his Corsair as he turned left. In a split second, he reverses his bank to the right, enabling him to turn inside one of the MiGs. The MiG-15 pilot tried to climb left until Folmar spoiled his plan by firing a five-second burst of four 20mm cannons.

The guns ripped into the side of the jet, causing it to burst into flames. For the first time ever, an F4U Corsair successfully shot down a MiG-15. The MiG pilot was forced to eject with his G suit burning from head to toe. Soon after, Folmar and his wingman formed another tight defensive weave. Unfortunately, another four MiGs joined the fight looking deadset on vengeance. With the odds stacked against the pair, they had nothing else better to do than fly home.

While trying to escape, Folmar’s left wing exploded from the MiGs’ relentless pursuit. His left aileron and around four feet of his left wing were gone, making the plane roll to the left. Instead of trying his luck landing back on USS Sicily, he opts to bail out into the ocean. Folmar repeated his position multiple times to the search and rescue distress signal before finally bailing out. Right after activating his parachute, another MiG made a firing pass at his plummeting Corsair. The remaining seven MiGs flew back home when Folmar finally hit the water. He recalls being stuck at sea for about eight minutes before an SA-16 Albatross rescued him.

A Career Worthy Of Praise

His decision to bail out gave ample time for his wingman to fly back home to USS Sicily safely. For his bravery and success, Capt. Jesse Folmar was awarded the Distinguished Flying Cross. His service during the war was also awarded a Purple Heart and a Silver Star. Later on, Folmar was honored by the National Museum of Aviation History in Florida, where a painting of his encounter was proudly displayed. After his death, he was inducted into the Alabama Aviation Hall of Fame.