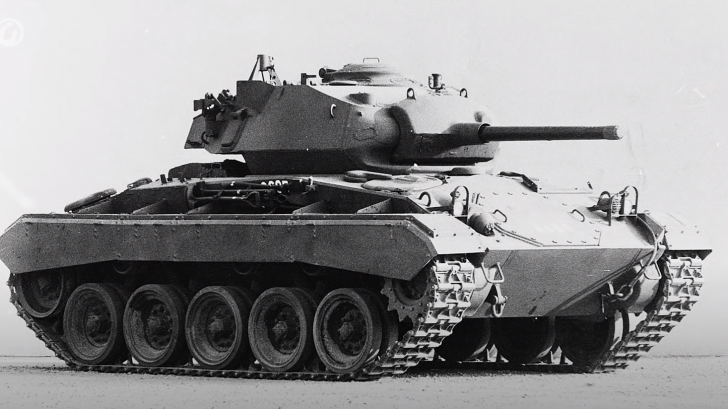 1. It was an interim solution

When war broke loose in Korea, the US decided not to wait on the T42 medium tank still in development. Their solution was to use an existing M46 hull and combine it with a T42 turret. Though it was still new, officials decided that the improvements in firepower and armor were worth the risk.

M47s were either fitted with T80E6 or T84E1 tracks – there were barely any changes in specifications. Both measure 23in wide, have a 6in pitch, 86 shoes, and have the exact ground contact length measurement. However, the former was rubber-backed steel, while the latter had rubber chevron tracks.

3. Last American tank to have a bow machine gun

Its main armament was a 90mm M36 gun supplemented with 71 rounds. Coaxial with the 90mm was the tank’s first .30-cal M1919 machine gun carrying 11,150 rounds. Its second M1919 was located in the tank’s right bow, making it the last US tank to have a bow-mounted machine gun in the hull.

4. Iran made a variant five years ago

Back in 2016, Iran unveiled their new main battle tank – Tiam. The tank’s hull appears to have been mated with a US M47M and a turret of China’s Type 59 tank. It features a laser range finder, a new fire control system, and composite armor. Tiam is now the second Iranian upgrade on M47 tanks, the first being “Sabalan.”

The tank’s main armament, the 90mm M36, was fitted with an M12 stereoscopic rangefinder protruding on both sides. It significantly improved first-round hit probability but was a bit difficult to use at the start of the war. Later on, this new system would become the standard in American tanks.

Much like any piece of new technology, the M47 had quite a rough start during production. The combination of a rushed development phase and the availability of the M12 rangefinder made it challenging to produce the tanks fully. The first 51 M47s were delivered without the rangefinder, and the turret apertures blanked off.

The lever steered the tank as well as selected the transmission gear ranges. There were four gear ranges namely: Neutral, Low, High, and Reverse.

8. It had an escape hatch

The tank operators were provided with escape hatches located on the floor of the hull. The clearance underneath the tank is 18in, just enough for the escape hatches to open.

9. Later versions had a vestigial tail

These used to be the mounting point for a track tension idler. They were effectively a return roller on a roadwheel arm with a torsion bar spring designed to apply pressure to the track outwards, keeping it in tension all the time. However, they later became obsolete and were removed.

10. The Terminator has one

Arnold Schwarzenegger, famous for his role as the Terminator, drove an M47 tank when he attended his mandatory service in 1965. He later obtained the same tank in 1992 and began using it to raise funds for his charity.