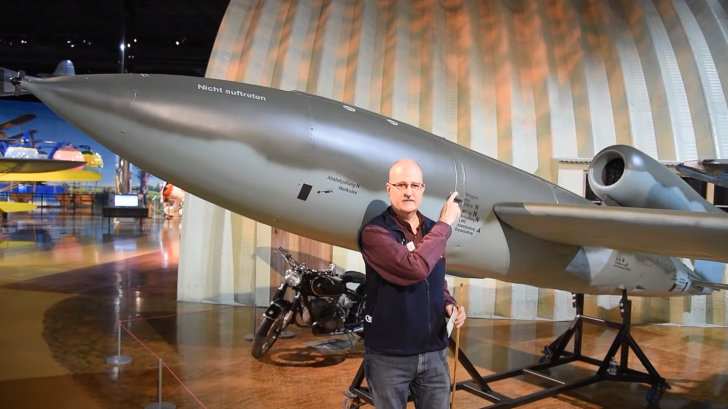 Kevin from Air Zoo gave us a technical tour of the world’s first operational cruise missile. Here are some interesting facts about the V-1 Flying Bomb:

1. The nose has a little spinner

Its spinner is an air log that measures the distance the V-1 has flown and is connected to a counter unit with a series of small wheels. When the V-1 is launched, the air log spins, turning the dials and activating the different functions of the flying bomb.

For safety reasons, the V-1 isn’t armed before its launch. When the air log measures a distance of about 35 to 40 miles from its launch site, it will trigger and arm the two fuses on top of the bomb.

3. Some had radio transmitters

If the V-1 were carrying radio transmitters, it would only turn on 30 to 40 miles before its terminal dive. The transmitters at the back would get a radio signal so the operators would know where the V-1 impacted the ground.

4. There were two impact switches

When it hits the target area, the switch behind the spinner activates the fuses to detonate the warhead inside the V-1. A belly switch would do the same job if the bomb landed on its belly.

5. Had a compass inside

The magnetic compass is found behind the impact switch and is calibrated before the V-1 is launched. They are utilized to keep the bomb on the desired direction. If it were to veer off course, it would signal the master gyro for a course correction, using its rudder to steer it back on course.

Its fuel tank is located where the wings connect to the fuselage. The first V-1s had a 160-gallon fuel tank but were insufficient for long-range strikes. Later on, they increased the storage to 214 and 225. It also didn’t need to be fed aviation-grade fuel – regular fuel worked just as fine.

7. Two explosive bolts in the rear

The bolts would explode downwards to get to a terminal dive, pushing the spoiler, forcing the tail to go up and the nose to point down. Afterward, the cutters around the servos would sever the lines to inactivate the rudder.

8. Powered by a jet engine

The V-1 is fitted with an Argus As 109-014 pulsejet engine producing 660lbs of thrust. Its noisy engine earned the V-1 the nicknames “buzz bomb” and “doodle bomb.”

As it reaches higher altitudes and encounters denser air, a hollow metal capsule sensitive to barometric pressure would expand. The expansion of the capsule would then limit the amount of fuel sprayed into the engine and vice versa.

It can reach its maximum speed not too long after its launch. As fuel is burned off, the V-1 gets lighter, giving it faster speeds. During the later stages of flight, the engine’s efficiency would degrade due to the shutters cracking from the heat. At this time, the speed would only be around the high 300s.