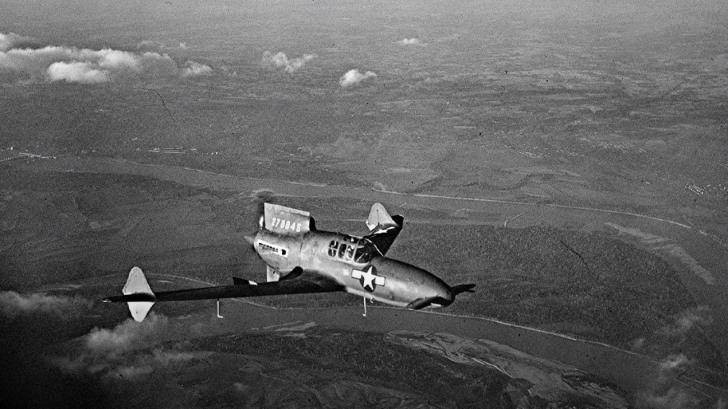 In late 1939, the USAAC sought out a design that specifically called for unconventional designs. Curtiss-Wright’s entry for the proposal was the XP-55 Ascender – or “Ass-ender,” as some would call it.

It had a rear-mounted engine driving an ejectable pusher propeller. Meanwhile, the rear-mounted wings were swept-back and had vertical stabilizers. Finally, there was an elevator in the nose to control the pitch. Though the elevators might seem like canards, they technically aren’t since they have no fixed surface.

Originally, the XP-55 planned to field one 30-cal machine gun, two 50-cal machine guns, and a 37mm cannon mounted in the nose. Its top speed was supposed to be 507mph at 20,000ft, and it can reach that in five minutes. However, the aircraft could only fly for ninety minutes.

Further Changes To The Prototype

The Army ordered three prototypes under the designation of XP-55. During the development phase, they discovered that the aircraft’s Continental I-1430 did not live up to expectations. It was later swapped out for an Allison V-1710 engine which reduced its top speed to 419mph and its endurance to just an hour. Lastly, its armaments were changed to four 50-cal machine guns.

After subsequent flight tests, they found out that the Ascender could only reach 377mph. Moreover, the engine overheated constantly, and even the gun mounts failed during weapon trials. Shortly after the tests, further developments were terminated. The Army considered the aircraft to be unacceptable in almost all metrics.