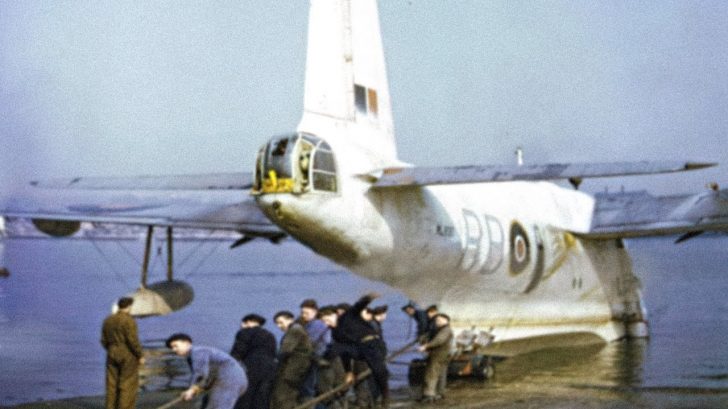 The Short Brothers’ Short Sunderland was a flying boat patrol bomber that could carry 4,950lbs of bombs, mines, and depth charges. Here is how and why this flying boat earned the respect of Germany in WWII.

Its interior was divided into two decks – the lower containing bunks, a pressure stove, a machine shop, and other living facilities. The aircraft was initially designed to carry seven members but brought more than eleven, depending on the mission.

On longer trips, the pilot had the option to turn on autopilot. The flying boat could also reach 210mph at 6,500ft with a service range of 1,780mi. In addition, it could also be fully refueled in just twenty minutes. If it were to cruise at 150mph at 2,000ft, the aircraft could last 18 hours, covering about 2,750mi.

Sunderlands were primarily used for tracking enemy ships during the early stages of the war. However, it didn’t take long for the Sunderland to prove helpful in rescuing crews from torpedoed ships.

The Mark 1 variant improved its armament by adding a 7.7mm gun on its nose turret. Still, its guns lacked range and power, but the Sunderland made up for it in durability. This was tested on April 3, 1940, when it shot down one of six German Ju 88Cs, forcing the remaining five to return to base. Germany dubbed the Sunderland the “Flying Porcupine” due to its defensive prowess.

If a Sunderland spotted a U-boat, the crew would engage it before it could submerge back into the water. Then, they would deploy depth charges set to explode up to 30ft down, destroying or damaging the U-boat. It is estimated that 26 U-boats were lost to Sunderland aircraft during WWII.