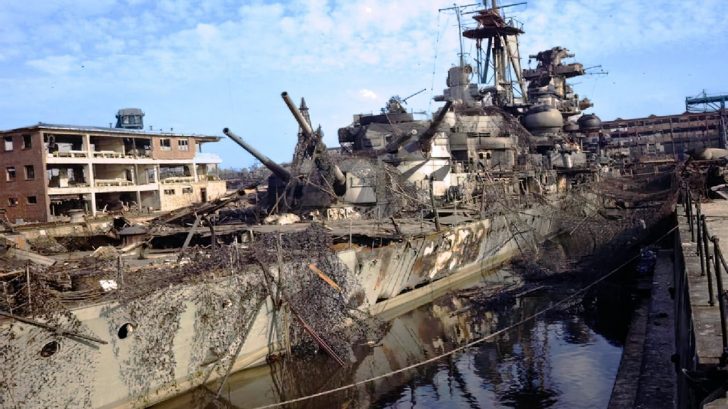 By December 1942, the Red Army was fighting the Axis forces across the Soviet Union with their backs against the wall. Their army was in dire need of food, ammunition, and weapons to keep the invaders at bay. In response, an Allied convoy was sent to the port of Murmansk from Loch Ewe, Scotland.

The convoy was comprised of 15 transport ships carrying more than 80 fighters, 30 bombers, 200 armored vehicles, 24,000 tons of fuel, and 55,000 tons of supplies. However, the convoy had to pass through the Arctic, where German submarines and surface vessels appeared in droves.

The British Royal Navy assembled an escort for the convoy led by Captain Robert Sherbrooke. It was composed of six destroyers, two light cruisers, two corvettes, two trawlers, and a minesweeper.

Unfortunately, the convoy was hit by a storm on December 28, scattering the ships during nightfall. By the time the ships fell back in line, Captain Sherbrooke had realized that the storm had pushed them closer to Altenfjord, where some German vessels were stationed at. Surely enough, the convoy was spotted by a German U-boat later into the night.

The U-boat quickly alerted the Kriegsmarine and devised a strategy. They planned to ambush the Allied forces with every available German capital ship in Norway. To do this, Germany separated its Navy into two equal groups; the first would attack from the North to attract the escort ships, so the other group was left alone with the merchant ships.

They first made contact at around 8:30 AM on New Year’s Eve when a British destroyer spotted two vessels on the horizon. After about an hour, a sudden flash of gunfire came from the German destroyers. Captain Sherbrooke hurriedly laid down a smoke screen to conceal the ships while his destroyers opened fire at the enemy.

As the battle raged on, it was certain that both forces were unsure of their own and their enemy’s positions. Despite the confusion, all merchant ships remained unscathed and reached their destination safely. 330 German troops were killed during the battle, one German Destroyer was sunk, and a heavy cruiser was damaged.

Adolf Hitler was furious at the battle’s outcome and threatened to scrap his surface fleet in favor of U-boats. Furthermore, the supreme commander of the Kriegsmarine resigned because of the blunder.

For his actions, Captain Robert Sherbrooke was awarded the Victoria Cross – the highest and most prestigious award of the British honors system.