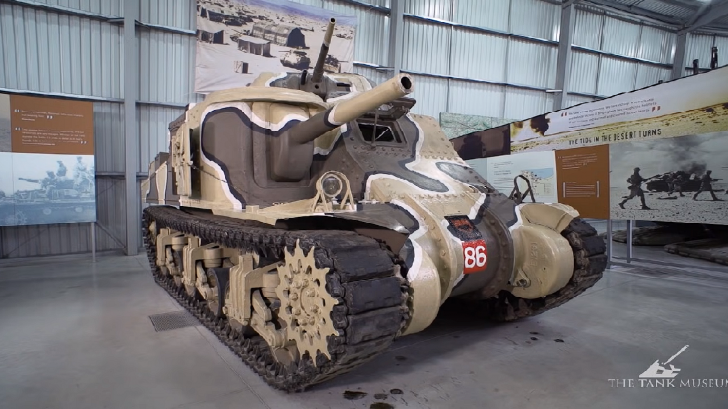 Tank Museum Historian David Fletcher shares some fascinating facts about the M3 Medium Tank – the vehicle used as a stopgap while the M4 Sherman was still in development. Here are ten things you need to know about the M3:

2. Both had the same engine

Though the two versions differed in design, the tanks were still powered by the same air-cooled radial engine. A single Wright-Continental R975 EC2 powered the medium tank and was rated at 340 to 400 horsepower.

Its primary weapon was a large caliber, medium-velocity 75mm gun mounted on its hull. The gun was operated using an M1 periscope on top of the sponson. In addition, a smaller turret with a high-velocity 37mm gun can be found at the top of the hull. This was aimed through an M2 periscope in the mantlet side of the gun.

Six crew members operated an M3 Grant. This included a driver, two loaders, two gunners, and a tank commander. In comparison, the M3 Lee was manned by seven, the last being the radio operator. Eventually, the US would eliminate the radio operator role and assign it to the driver instead.

The driver had access to at least two.30-06 Browning machine guns mounted in the hull. The tip of the guns appeared “hidden” and only fired in the direction the tanks were pointing.

It was an all-around effective tank on the battlefield with armor and firepower superior to its enemies. However, the M3 only held its superiority for about two years before better tanks were developed. By then, M3 tanks were withdrawn in favor of the M4 Shermans.

An M3 could reach a maximum speed of 26mph on smooth roads but suffered off-road with a top speed of only 16mph. The tank also had a fuel capacity of 662L and an operational range of about 120mi.

8. Modified for its Desert Campaign

After being shipped to North Africa, the M3 tanks were fitted with sand shields and dust covers for the gun mantlets. Their appearance on the continent caught Rommel’s forces by surprise; the tanks had superior range and were equipped with high-explosive shells that wiped out German infantry.

After the end of the war, the Australian Army converted 14 of its M3 tanks to the Yeramba – a self-propelled gun design fitted with a 25-pounder field gun. Later on, other M3s were acquired by civilians to be converted to tractors.