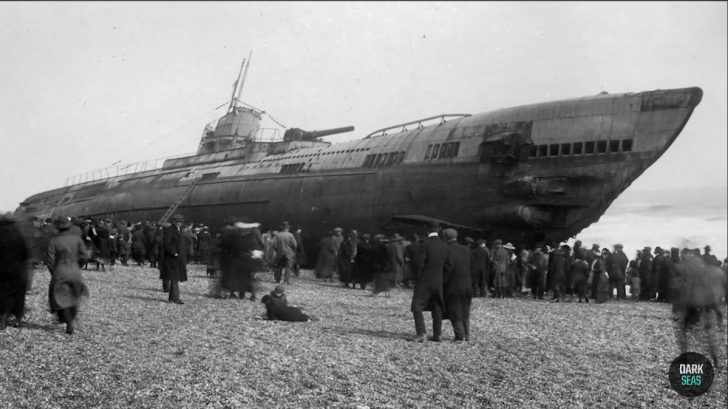 The U-118 submarine was a submarine by the Imperial German Navy that engaged in naval warfare, taking part in the First Battle of the Atlantic.

During World War I, the Imperial German Navy had nine submarines in its UE 2 class of ocean minelayers among its entire fleet of 329 submarines. One of them was the colossal U-118.

On February 23, 1919 on the anniversary of her launch, the submarine was surrendered and transferred to France where she would eventually be broken up for scrap.

During the early hours of April 15, the U-118 were on tow through the English Channel when a heavy storm bashed the vessels and broke their dragging hawsers. The submarine then drifted away eastward towards Sussex.

In the morning, locals awoke to the unusual sight on the shore, a colossal ship marooned on the sand. Thousands flocked to take a glimpse of the gigantic submarine.

For a fortnight, the Admiralty allowed the town clerk to charge a fee of six pennies for visitors who wanted to climb her deck, but soon, tour guides and guards became sick.

The sickness persisted, and grew worse, and more perished that December. Visits were suspended until the mystery was solved.

Later on, it was found out that the culprit was a chlorine gas leak escaping from the ship’s batteries. These fumes inflicted severe lung abscesses and even the brain for the unfortunate Coast Guards.