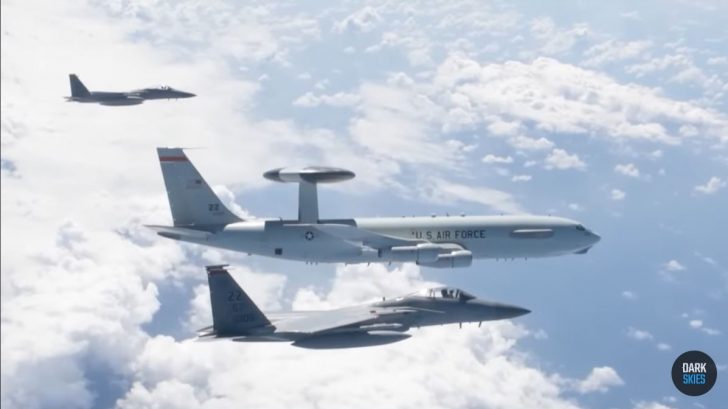 The Boeing E-3 Sentry is an airborne early warning and control aircraft developed by Boeing, It proved to be an impressive marvel of engineering, acting as America’s radar control tower, and America’s eyes in the sky.

The E-3 Sentry is a massive airborne warning and control system designed as early as 1963 and then launched in the 70s. It owes its iconic look to the massive 10-foot-wide circular radar located above its hull, playfully called the “Oreo” by the crew.

The Most Complex Airborne Operations

The E-3 can detect, identify, and track aircraft from the ground all the way to the stratosphere, and over 400 miles around the plane.

Data gathered is then transferred to any friendly warplane, ship, or command center in the region.

The E-3’s formidable surveillance prowess allows the US and its Allies to create complicated airborne operations in any part of the world, even without conventional radar coverage.

Apart from its impressive surveillance technology, it’s also one of the warplanes with the highest survivability rates in the world. Incoming attacks are detected long before it reaches the Sentry.

Threats from the Far East

Images from Western spy satellites revealed that many US vehicles, ships, and even military bases are replicated by the Chinese army across the Gobi Desert.

What’s more concerning is that images show that there were two E-3 mockups used for target practice in China’s long-range missile systems. Today, the US is working on a new generation of AWACS to replace the E-3 Sentry.