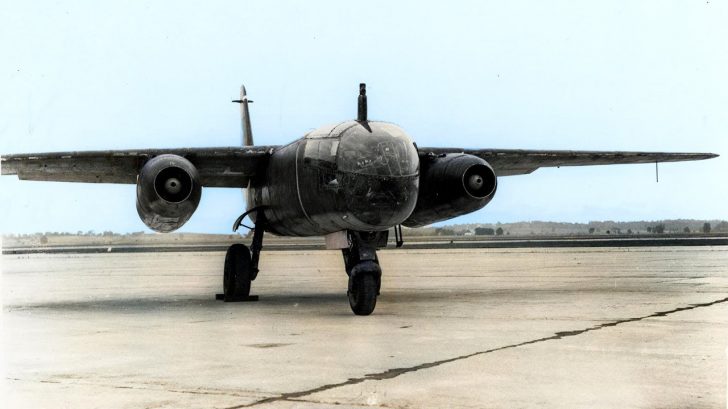 Germany was in possession of the world’s first operational jet-powered bomber. Fast, graceful, and maneuverable – yet its existence is glossed over when discussing WWII-era planes. Here’s 10 things you need to know about Arado Ar 234, the world’s first jet bomber.

The Ar 234 was made in response to the de Havilland Mosquito in 1940. The German Aviation Ministry issued a request for a jet-powered reconnaissance aircraft capable of crossing Britain, all the way to the Scapa Flow naval base.

Walter Blume, a German fighter ace of WWI, was the project’s leader. Even early on, his team had already decided to include two Junkers Jumo 004s – the first turbojet engine in operational use worldwide. These were also the first sucessful axial compressor turbojet and were rated at 1,990 lbf each.

Two reconnaissance cameras could be fitted inside its rear fuselage. Meanwhile, most of the fuselage aft was occupied by fuel to lengthen the operational range. Its landing gears were also different since standard undercarriages couldn’t fit the aircraft.

In order to take off, the Ar 234 needed to ride a three-wheeled trolley called a Bugradstartwagen. It would then rely on its three retractable skids under its fuselage’s central section and the nacelles for landing.

Though it was designed to have the Jumo engines, the company wasn’t able to get them for months. Both BMW and Junkers had trouble producing enough engines for the Me 262 and Ar 234, so Messerschmitt was given priority. Arado got the engines eight months after the Messerschmitt 262s got theirs.

Its V7 prototype made history on August 2, 1944, as the first jet plane to conduct a reconnaissance mission. The aircraft was piloted by Lt. Erich Sommer and flew over Normandy to take photographs with its two Rb 50/30 cameras.

The aircraft’s first variant was intended for reconnaissance roles, while the B variant assumed the bomber role. Its C-series was barely completed by the end of the war, and only 19 D-series planes were produced. The P-series, its two-seat night fighter variant, included different radars but never made it into production.

In 1945, Captain Don Bryan of the US Air Force managed to shoot down an Arado Ar 234 using his P-51 Mustang’s .50-cal machine guns. Bryan scored the kill when the jet aircraft was on a bombing run over the Ludendorff Bridge. This encounter was the first reported air-to-air kill of the Arado Ar 234 Blitz.

The Blitz’s only significant participation came with its introduction to the KG 76 unit. While assigned there, the unit attempted to destroy the Ludendorff Bridge of the Rhine River.

Its turbojet engines required an overhaul every ten hours of operation. To make matters worse, the engines needed to be replaced after every 25 hours. In addition, its takeoffs required longer runways, and the aircraft needed a large amount of fuel.