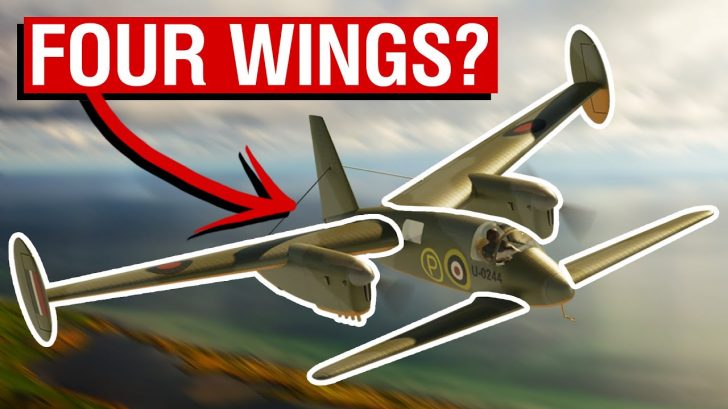 One of the most unique-looking aircraft in the 1940s is the ‘Libellula’ aircraft by Miles Aircraft, specifically the M.35 and the M.39B.

‘Libellula’ was a designation given to a series of Miles aircraft that experimented with the same concept. From the get-go, this was predicted to have a fair number of benefits over conventional wing configurations.

When properly implemented, these would be hugely beneficial for carrier-based aircraft, where every reduced meter of needed hangar space is considered valuable.

Miles Aircraft Limited under lead designer Frederick George Miles, the development would begin on their first tandem wing design in 1942.

Miles and other designers were looking for a solution to the Navy’s carrier fighter problem- the attrition rates from landing accidents have become appalling, and they realized that the tandem wing design could be the solution.

The development of the aircraft was done in secrecy. Miles first built a small flying wooden mock-up and designated it as the M35.

Additional flights after the first maiden flight were considerably more successful. Miles then submitted a proposal for a naval fighter based on the M35 to the admiralty and Ministry of Aircraft Production which outright rejected it. Despite the setback, Miles wasn’t to be discouraged.

Finding the results of the M35 promising, Miles immediately began work on an enlarged bomber design of the same principle to meet Air Ministry specifications.

This would immediately result in the M39B. A tall ventral stabilizer was added to improve lateral stability. Meanwhile, the general layout of the front wings, cockpit, swept back rear wings and twin outboard vertical stabilizers would more or less stay the same albeit enlarged from the M35.

Despite getting official backing from the Air Ministry, only a single prototype of the M39B would be produced.

Furthermore, the conclusion of offset trials revealed that the benefits of tandem-wing aircraft were now being nullified by those of rear-facing jet engines which provided the same visibility and advantages as the Libellula designs. After further testing, the M39 was eventually scrapped.