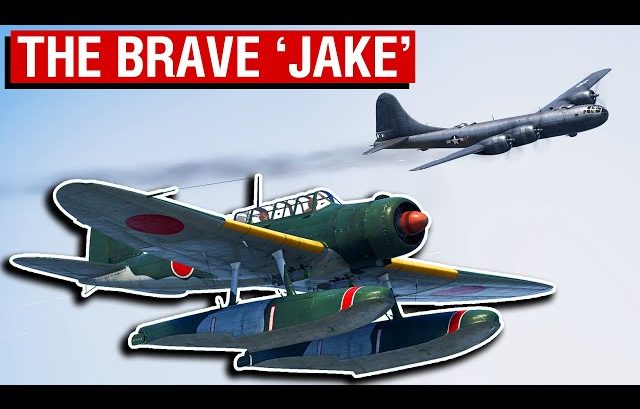 The Aichi E13A ‘Jake’ was a long-range reconnaissance plane used by the Imperial Japanese Navy during World War II.

It became Imperial Japan’s most important floatplane and would serve until the war’s end, notoriously in the form of Kamikaze attacks against American naval convoys.

The Aichi had a wingspan of 14.5 meters and a length and height of 11.2 and 7.3 meters respectively.

The plane weighed around 2,642 kilograms when empty. Fully loaded, it could carry another 1,000 kilograms. It also featured folding wings, significantly reducing the needed hangar space on a carrier.

Unusually for an aircraft in this era, the E13A saw very few modifications and variants throughout the Pacific War. It remained virtually unchanged in its entire production run from 1940 to 1944.

The aircraft entered service with reconnaissance units in 1941 and saw its combat debut during the Second Sino-Japanese War.

As part of the eight Cruiser Division, it would also serve as the plane responsible for the pre-raid reconnaissance for the infamous attack on Pearl Harbor.

As the production ramped, the aircraft would be a relatively common sight in many Japanese Naval Operations. It would see service in many coastal patrols, ground attacks, troop support, sea rescue operations, and much later in the war, kamikaze attacks.

As the war progressed, this Japanese floatplane would be thrust into a number of roles it had never been designed for, including B-29s.

One incident happened in May 1945 when the A6M2 and E13A were patrolling the Bongo Channel when they came across a US submarine with a supporting Dumbo B-29. The submarine dove immediately, and the B-29 began engaging the Japanese aircraft, serving as a flying gunship.

The A6M2 immediately retreated and returned to base, but the E13A stayed and attempted to bravely (yet foolishly) fight the B-29 alone. Both planes engaged in a dogfight, and predictably, the E13A was fatally shot down by the B-29’s numerous defensive gun turrets, going down in flames.