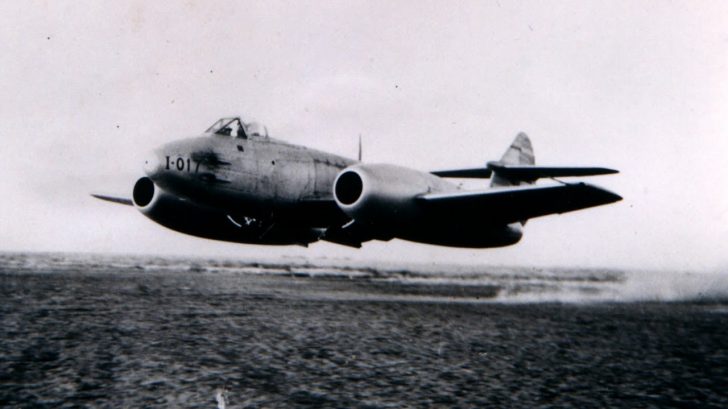 Air combat during WWII was dominated by propeller-driven aircraft. Regardless, the Allies were still cautious about the fact that the Germans had jets in their arsenal. In lieu of this, they decided to make one of their own. It would be called the Gloster Meteor and was the Allies’ only jet aircraft to engage in combat during the war. Here are five facts about this record-breaking jet plane:

1. Had a rocky start during development

It was first powered by W.2B turbojets, but they quickly found out that the generated thrust wasn’t enough for the aircraft to take off. The Meteor finally took off on the fifth prototype, while fitted with two Halford H.1 engines. However, only two prototypes flew with the engines because of their low flight endurance.

890 Meteors were lost while in service with the RAF – 145 of these in 1953 alone. In total, it resulted in the death of 450 pilots due to its poor brakes, malfunctioning landing gear, high fuel consumption, and short flight endurance. Most notably, there were no ejection seats available at that time.

A Meteor F.3 set the first official airspeed record for a jet aircraft on November 7, 1945. The F.3 flew at a record speed of 606 mph that day, but it was later surpassed by a Meteor F.4 a year later when it reached 616 mph.

The first operational combat mission of the Meteor involved “killing” the German flying bombs. By the end, the Meteors were credited with destroying 14 flying bombs.