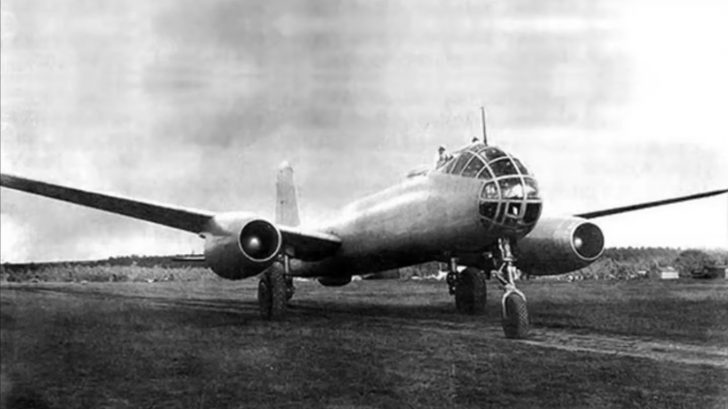 The Junkers Ju 287 was Germany’s attempt to make a multi-engined jet bomber. Here are five facts about their forward-swept-winged franken-jet:

1. Made up of various parts from different planes

Its fuselage came from the He 177 Greif heavy bomber, the nosewheels from scavenged B-24 Liberators, the undercarriage of the Ju 352, and the tail of either the Ju 188 or Ju 388. There’s a reason why some people call it the Franken-jet.

The Ju 287 needed to have a fixed undercarriage to save on both weight and complexity since its wing box couldn’t have cutouts to store the wheel. This, in turn, made the Ju 287 one of the very few jet-powered aircraft to have this setup.

Such a configuration was meant to increase lift at low speeds. Moreover, this type of wing setup allows for a much larger internal bomb bay at the center of the plane.

4. Unusually slow for a jet plane

When you hear “jet planes”, you think of a very fast aircraft – supersonic, even. Though the Ju 287 is considered a jet bomber, this 60-ft-long plane could only achieve 347 mph. If these planes were to see combat, they’d probably be torn apart by Allied fighters.

5. The Soviets finished the job

Production of its V2 variant was almost completed when the Red Army overran the Junkers factory. All of the staff were captured and taken to the Soviet Union – and so were the remnants of the V2 prototype. The USSR would later create the EF 131, which had the same features as the Ju 287, with a longer fuselage and six Jumo 004 turbojet engines.