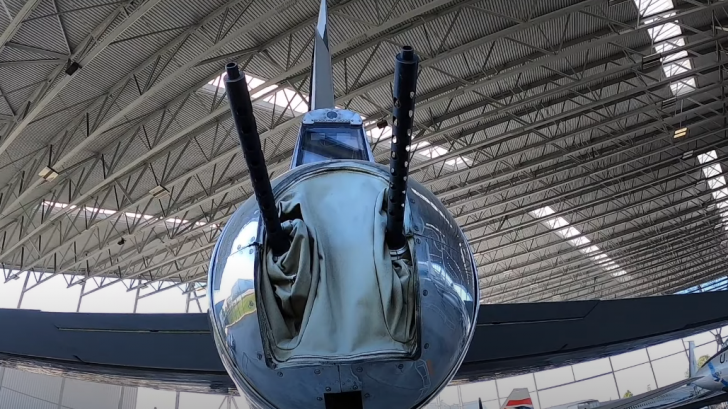 The B-29 tail gunner is in the aft section of the bomber, facing backward, and is responsible for protecting the backend and the formation from tail attacks. How effective was it?

The tail turret has an arc travel of up to 30 degrees in all major directions. Moreover, the guns were fitted with the General Electric Central Fire Control System and were aided with position sensors and gyroscopes. These features would then feed data into an analog computer that calculated a ballistic solution accounting for range estimation, bullet drop, gunner’s and target deflection, windage correction, and parallax compensation.

Earlier models of the B-29 were fitted with a 20mm center tail cannon but were later replaced due to a 125-round ammo capacity. Most of those found in newer variants have maintained a dual 50-cal tail gun configuration, offering a 500-yard advantage over attacking interceptors.

B-29s flew in a 12-plane formation during daylight high-altitude missions. While in this formation, the tail is well protected by 41 machine guns at the low 6 o’clock level and 51 at the high direction.

Difference Between Day and Night Missions

Japanese fighters usually attacked from the front. Of the 6,000 attacks in an April 1945 report, only 16% occurred from the tail and 49% from the nose. However, this ratio would reverse during night attacks, with 60% coming from the tail.

Ultimately, a declassified 1945 analysis report outlined the effectiveness of the B-29’s gunnery system against rear attacks. Simply put, the ratio of enemy losses to bomber losses is 70 to 1 for rear attacks.