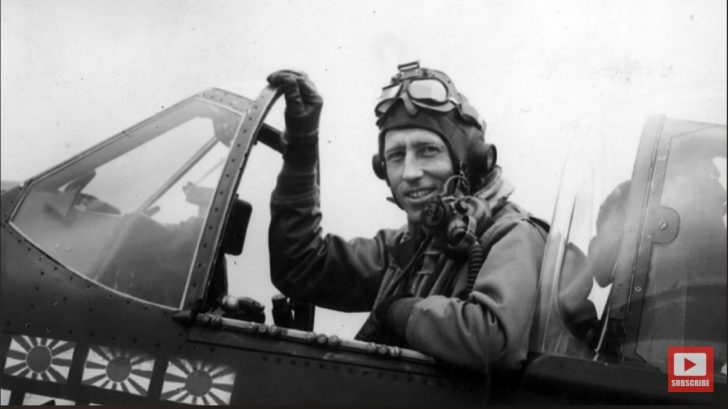 Flying the P-51 Mustang Ding Hao!, ace pilot Major James H. Howard defied all odds by defending the heavy bombers of the 401st Bomb Group from a swarm of Luftwaffe fighters. Andy Rooney went as far as saying that it was “the greatest fighter pilot story of World War II.”

Not far off, 44 P-52 Mustangs led by Major James H. Howard race to the rescue. As the Luftwaffe fighters attack the bomber formation, Howard immediately went into the offensive and managed to shoot down a twin-engine Messerschmitt Bf 110 Zerstörer long-range fighter.

During the engagement, he was separated from his group but managed to climb up, rejoining the bombers.

Approximately thirty German fighters began attacking the formation, and Howard bravely (and single-handedly!) went after them.

He managed to take down two planes, shooting two more and damaging at least another two. He continued attacking even when he was low on fuel.

Lt. Lieutenant Colonel Allison C. Brooks later recalled the incident, “For sheer determination and guts, it was the greatest exhibition I’ve ever seen. It was a case of one lone American against what seemed to be the entire Luftwaffe. (Howard) was all over the wing, across and around it.”

When Howard returned back to base, his Mustang returned only with a single bullet hole. He was later awarded the Medal of Honor and was the only fighter pilot in the European Theater to ever receive the award.