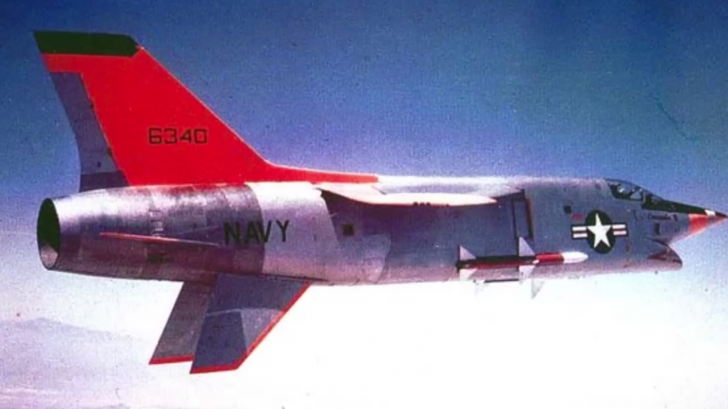 The US Navy was wary of the F-4’s capabilities when it started development in 1955. Its success wasn’t guaranteed – after all, poorly performing jet engines were quite common in a number of Navy fighters. Because of this, the Navy thought it would be wise to have a backup. Surely enough, Vought provided a solution in the form of their soon-to-be-delivered F-8 Crusader.

Though it was internally called the V-401, its designation was later changed to the Vought F-8U3 Crusader III or the Super Crusader. Vought developed the aircraft in parallel with the F8U-1 and F8U-2s, this time being a larger aircraft (around 46% heavier) with an even better performance.

The Crusader III was a different aircraft and shared few parts with its originator. In addition, it also had a much larger and more sophisticated radar.

A bigger supersonic aircraft also leads to a bigger and more capable engine. Thus, the Crusader III was fitted with a Pratt & Whitney J75-P-5A engine with a rated output of 29,500 lbf of afterburning thrust. J75s were developed from the J57 engines that powered the original F-8 fighters.

Its new air intake was a divertless supersonic inlet (DSI) designed to manage the localized shock wave caused by supersonic travel and to enable the engine to “gulp” the air it required.

Aside from its new intake, the Crusader III also featured retractable ventral fins that were deployed in flight to stabilize the aircraft at high speeds. Vought suggested this change after claiming that the fighter could top out closer to Mach 3 when the design was finalized.

In December 1955, the Navy decided to hold a competition between the F-4 and the F8U-3. Results from the fly-offs revealed that Vought’s design had a clear advantage in maneuverability. In fact, John Konrad, Vought’s chief test pilot, stated that the Crusader III could “fly circles around the Phantom II”.

F-4s could carry a larger payload and were designed to perform air-to-ground and air-to-air missions. Later on, the Phantom would replace the F-8 Crusaders as the primary air superiority fighter during the Vietnam War.

The F8U-3 program was canceled after the F-4 Phantom eventually won the contract with the Navy. All five Crusader IIIs built during the program were later scrapped for parts after a stint with NASA.

With no further support left, the five Crusaders were transferred to NASA for atmospheric testing. This decision came with the fact that the F8U-3 was capable of flying above 95% of the Earth’s atmosphere. Funnily enough, NASA pilots would often use the aircraft to intercept and defeat US Navy Phantom IIs in mock dogfights before the Navy put an end to it.