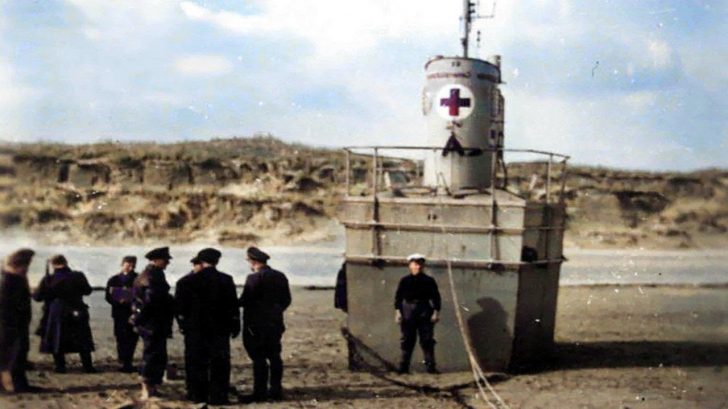 Downed German airmen clung to the Rettungsboje, or rescue buoys easing their struggle. But as they clung to its handrails and climbed on it, they found an access door that looked like a shelter in the middle of the ocean. As soon as they went inside, they couldn’t believe what they saw.

By the beginning of the fall, the Reich Air Ministry commissioned an area of research and project development, working on an emergency solution for castaways.

A rescue buoy was eventually presented, and during the next two months, no less than 50 units were built and distributed throughout the channel.

The concept behind the Rettungsboje was simple- it was basically a capsule floating on the ocean’s surface.

Measuring 13 square meters, it was either square or hexagonal in shape. It was considered a safe haven for downed airmen in the vicinity.

The platform was topped by a two-meter turret, which in turn, had red and white light signals that could be seen roughly a kilometer away. It was painted light yellow above the waterline with red crosses against white oval backgrounds on each side of the turret.

Supplies inside the buoy are calculated to last four days, and rescuers are used to checking them daily. Upon the arrival of rescue ships, the buoys were immediately resupplied.

The Brits later copied the German buoys and built so-called lobster pots. Notably, British variants were shaped like a boat’s hull, though without an engine and navigation system, making them stable for the movement of tides.

With proper training and good luck, the ASR was able to save hundreds of airmen and deliver them to safety.

On the war’s end, RAF proved to be superior to the Luftwaffe in every respect and ultimately came out victorious.