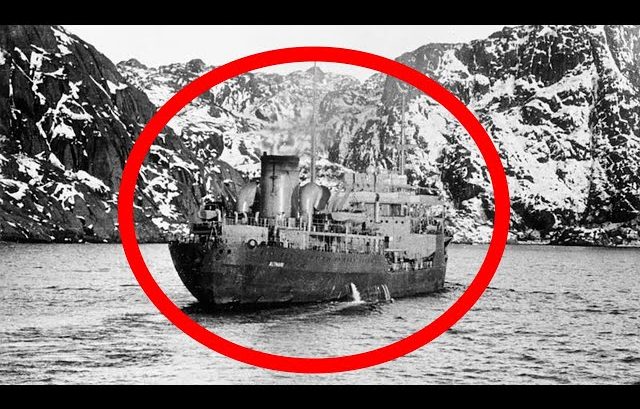 The Altmark incident was a naval incident in World War II between the German tanker Altmark and several British destroyers. The incident happened in February 1940 in neutral Norwegian waters. Aboard the Altmark were about 300 Allied prisoners of war.

However, when the Brits attempted to board the ship, the Norwegians suddenly aimed their torpedo tubes at them. All three sides settled in a standoff.

When the German tanker Altmark was on her way home, her crew received the news that war was imminent, and was ordered to travel to the South Atlantic as a replenishment ship.

Common seamen were then transferred to Altmark and the conditions aboard the converted ship were harsh.

Altmark’s Captain, Heinrich Dau, decided to head back to Germany with all prisoners aboard. However, this wasn’t an easy task the United Kingdom’s Royal Navy dominated the seas. Furthermore, several officers that were released revealed Altmark’s existence and her secret prisoners.

Believing that the best way to get home was getting around Great Britain through the North, the captain gave orders to pass through the Norwegian littoral. First disguised as a Norwegian tanker and then as an American one, Altmark managed to elude the British, and then entered the waters of neutral Norway on February 14, 1940.

Believing that the Altmark was carrying British prisoners, Winston Churchill demanded that the Norwegians search the ship at once. The Norwegians reluctantly agreed, sending a torpedo boat to inspect the ship. Captain Dau didn’t try to hide Altmark’s identity, saying that it was merely a state-owned tanker.

Weary of a belligerent Germany, and an insistent Royal Navy, the Norwegians didn’t do a thorough job, wanting the incident to be over and get the ship out of Norway’s water as soon as possible. Two more inspections were carried out, and the carrying of any hidden prisoners.

On the third inspection, prisoners shouted, stomped, and banged the walls, but it is unknown whether the Norwegians heard the soldiers, or chose not to.

The same day the ship passed through the exclusion zone, a British plane flying over Norway spotted the German tanker. The detachment of ships from the Royal Navy led by the Destroyer HMS Cossack was immediately sent.

As the Allies approached the ship, her Norwegian escort ships blocked them from boarding. The local officers warned that they would open fire if the Allies made more attempts. Philip Vian, captain of the HMS Cossack suggested that he board the Altmark, inviting the Norwegians to take part, but the latter refused.

As a result, Altmark ran aground, and the British boarded her on February 16, after some hand-to-hand fighting with bayonets. The Altmark’s crew was overwhelmed with the fight and the Germans eventually surrendered.

After searching the ship 299 prisoners were found. Although the Altmark Incident became a propaganda coup for the British, it had severe consequences for Norway. Norway’s sympathy towards the Allies prevailed.

Furthermore, this incident enraged Adolf Hitler. He was convinced that he no longer can trust Norway intensifying his plan to invade the country to safeguard more than 11 million tons of iron ore that Germany got from Sweden yearly.

Both Denmark and Norway were then occupied by Nazi Germany in less than two months.