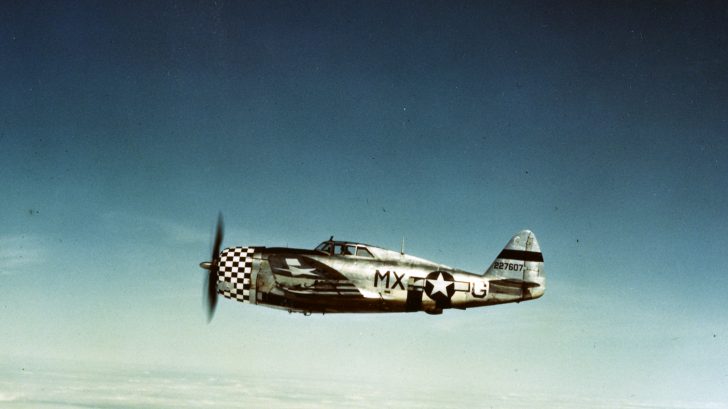 View of a Republic P-47 Thunderbolt of the 8th Air Force in flight over England, ca.1940s. The plane was part of the 78th Fighter Group, 82nd Fighter Squadron. (Photo by PhotoQuest/Getty Images)

Even though considered to be aesthetically ugly compared to its sleek contemporaries, the Republic P-47 Thunderbolt is still a remarkable aircraft. It served on all theatres of the war and was the preferred aircraft of many flying aces. But what is so special about this plane and how did it help the Allies win the war against Germany?

Here are five fascinating facts about the Republic P-47 Thunderbolt:

The P-47 Thunderbolt is a big and heavy fighter. It was one of the largest single-seated aircraft produced by the Allies during the war. Even when generally emptied, it was still two times heavier than the British Spitfire.

2. The P-47 Thunderbolt is Extremely Durable

The P-47 was very difficult to destroy. Even after absorbing a hail of enemy fire, the P-47 can remain operational and keep its pilot alive. Due to its ruggedness, only about 0.7 percent of Thunderbolts were lost during combat. The P-47 became a favorite of many pilots mainly because of its ruggedness and roomy cockpit.

Despite its weight and shape, the Thunderbolt was terrifyingly fast. It was fitted with the powerful Pratt & Whitney R-2800 Double Wasp engine, an 18-cylinder powerhouse capable of producing 2,600 horsepower. Later models even managed to break speed records.

4. It Had Terrifying Firepower

Equipped with eight .50 caliber machine guns, the P-47 can shred its target down within seconds. With its capacity to carry a total of 3,400 rounds, the P-47 can unleash more firepower compared to other fighters. The Thunderbolts were well known for diving down into enemy aircraft or ground targets with all guns blazing.

Due to its similarity to a jug of milk, the P-47 Thunderbolt was nicknamed the “Jug.” Initially, many pilots were skeptical and hated the aircraft. However, it quickly became a favorite of many after the discovery of its effectiveness in rolling and diving, which proved to be useful in combat.