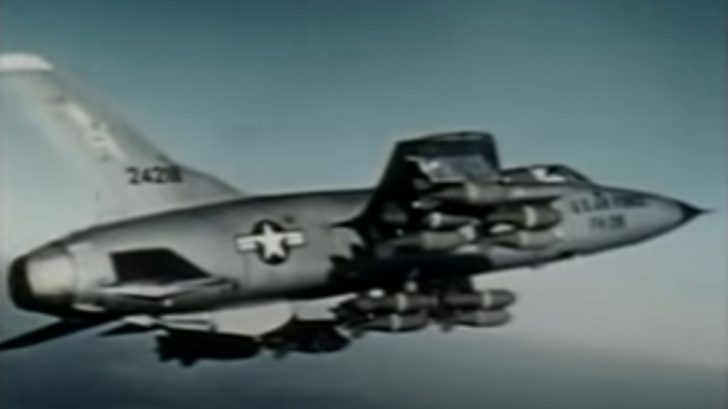 A massive aerial bombardment campaign launched by the US against Vietnam saw the heavy use of Thunderchiefs and Phantoms. The former flew 75 percent of the strikes and as a result, took the most losses than any other aircraft. After the end of the operation, more than half of the Air Force’s F-105s were destroyed.

With the constant threat of other nations’ forces, came the quick advancements in technologies used for combat. The Thunderchief is an example of such advancements. Its internal bomb bay alone could carry 14,000lb of ordnance. It was drawn up to be an aircraft that could dominate the air with its exceptional speed and payload capacity.

The F-105 was originally designed as a nuclear-attack aircraft. But its design was later changed to a supersonic fighter-bomber that can operate in lower altitudes. Flight characteristics, range, and payload were the focus of the final design. In turn, the Thunderchief delivered on that promise.

Even though it was mainly used in lower altitudes for bombing missions, the F-105s also did well in higher altitudes. It could reach Mach 2.1 speeds at 35,000ft and exceed the speed of sound at sea level. The Thunderchief lived up to its expectations as a supersonic jet aircraft.

What makes the Thunderchief stand out from others are its wings. With a length of 64ft, this fighter plane only had a 34ft wingspan. This was done to make flying at lower altitudes more stable and have less drag at supersonic speeds. It prioritized those attributes first before the maneuverability of the aircraft.

The Thunderchief was a long aircraft. So long, in fact, that the difference between its length when compared to the B-17 was 10 feet. Yet, the F-105 only had one seat while the B-17 made room for 10 crew members. Still, the F-105 could hold more internal payload than the B-17.

7. Designed to Carry a Nuclear Weapon

An impressive feature of this plane is its ability to carry nuclear bombs. An F-105D could carry 4 types of nuclear bombs. These were the B28 (Mark 28), B43, B57, and B61. The Thunderchief had its shortcomings as a nuclear-attack aircraft and the Air Force soon changed its missions to conventional bombings.

8. Shortage of Ordnance and Pilots

Because of the constant aerial bombardment during the Vietnam War, the Thunderchiefs accrued huge losses. What really hit their morale was the shortage of pilots and bombs. Pilots from refueling tankers were used in certain conditions. Meanwhile, the shortage of bombs meant that in some missions, each F-105 could only carry one bomb.

Its nickname, the “Thud”, supposedly came from a joke that the pilots made because of the aircraft’s tendency to be shot down. According to them, the Thunderchief would make a “thud” sound as it crashes on the fields of Vietnam. Because of that, the nickname was “sanitized” and now has multiple meanings depending on who you ask.

10. Was The Largest Combat Aircraft

As it entered service in 1958, the F-105 was the largest single-seat and single-engined combat aircraft in history.