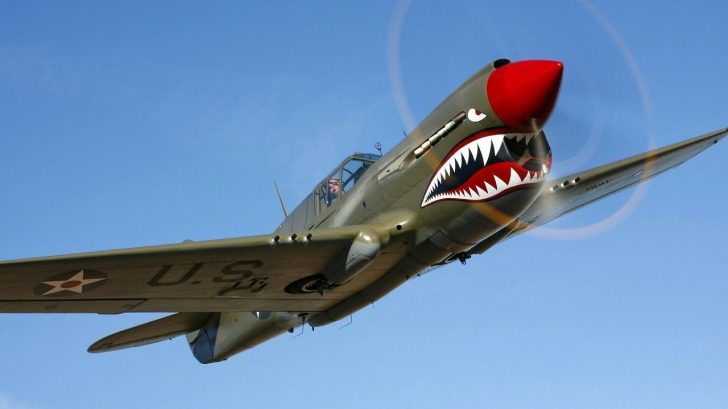 The P-40 did not have a passable performance in northwestern Europe. Its lack of a two-stage supercharger made it relatively weaker than the Messerschmitts and Focke-Wulfe. Therefore, the decision was made to reassign the P-40 to the North African campaign which operated in Libya, Morocco, Tunisia, and Egypt.

It made up for its lack of a two-stage supercharger by having a longer range than the Spitfires and Messerschmitts. It also held its own in combat, able to sustain more damage than a regular warbird was able to handle. With that said, some pilots still found their firepower lacking.

4. Used by The Flying Tigers

One of the most famous users of this warbird was the 1st American Volunteer Group. The group was known as the “Flying Tigers” by many. Formed by Claire Chennault in 1941, they saw most of the action over China and Burma while fighting the infamous Japanese Zeros.

5. First Prototype Was A Dud

The first prototype that the Curtiss Wright Corporation put out was not considered to be outstanding. Fighter pilot Benjamin Kelsey tested the aircraft and found it to be slower than expected. After a lot of modifications, the P-40 was finally ready to take the skies with pride.

A properly maintained P-40 can apparently out-dive a Japanese Zero. When in trouble, pilots would dive out of the way of the Zeros to facilitate their escape. Although, such a maneuver needs to be practiced. In dives, the pilot would need to keep the rudders straight as it picks up speed.

7. Origins of the Shark Paint

The Warhawk was not the first plane to ever adorn a shark on its nose. The Flying Tigers got this idea from a picture that an AVG pilot saw in a newspaper. That picture was of a P-40 from the 112 Squadron of the Royal Air Force fighting in North Africa. The P-40 had the now-iconic shark paint on its nose and the AVG pilot had the idea to copy that onto his own P-40.

The P-40 had a lot of variations called the Warhawk, the Tomahawk, and the Kittyhawk. The main difference between the variants is the addition of machine guns, self-sealing fuel tanks, and underbelly drop tanks. To make it easier, the first versions of the P-40 are the Warhawks. Then, from P-40B to P-40C, are Tomahawks. From the P-40Ds down to the P-40Rs are what we call the Kittyhawks.

The other famous user of the P-40 was the Tuskegee Airmen. The 99th Fighter Squadron used the P-40 initially before moving on to the P-51 and P-47s. The 99th had its first verified kill while using the P-40 after downing an FW-190. They used the P-40 for eight more months until it was replaced by P-51s.

There is only so much the P-40 can do. Even though it proved to be a worthy fighter against the Japanese Zeros, it came short when it came to German planes. The introduction of the P-51 significantly decreased the role of the P-40 in the war.