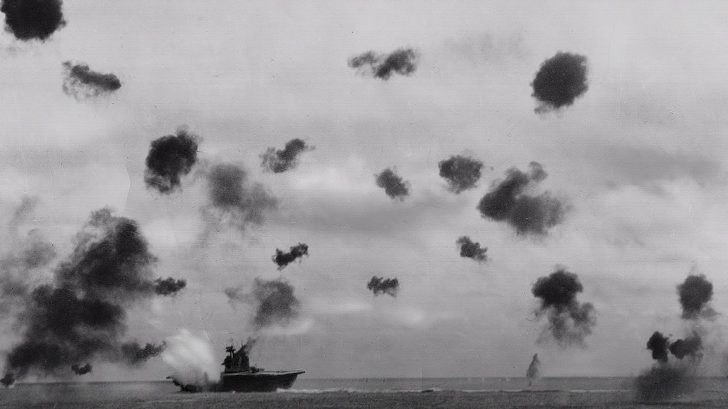 On their way to escort the 18 Val dive bombers, 6 SBD Dauntless planes were spotted by the Japanese planes. Instead of focusing on the task at hand, the 6 Zeros who were supposed to escort the Vals decided to go for the Dauntless. The fight resulted in a stalemate with no planes going down on both sides. However, 2 Zeros had to return to the Hiryu.

Yorktown saw action during the Battle of the Coral Sea. A 551lb Japanese bomb hit its wooden deck and exploded inside the ship. After almost 48 hours of work by more than 1,400 men, Yorktown was ready for action once more. It later joined the Enterprise and the Hornet at Midway. 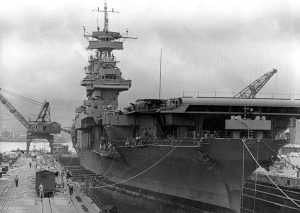 During their first attack, the Japanese had a 71% hit rate with 3 hits and 2 near misses out of 7 aircraft. After the bombings, 13 Val dive bombers and 3 Zeros were lost. In total, it amounted to a 72% loss rate for the Japanese. For comparison, only one Wildcat was shot down. 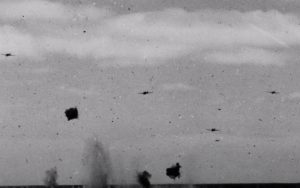 In what felt like a scene straight out of a hero movie, Lt. Cdr. Jimmy Thach took to the skies to deter the Japanese planes from further damaging the US ships. While in his Wildcat, Thach managed to severely damage Lt. Tomonaga’s plane. Before crashing to his death, Tomonaga launched a torpedo but did not hit Yorktown.

The Japanese just could not catch a break. They put emphasis on targeting the remaining healthy carriers, Enterprise and Hornet. But, because of how fast the American crews put out the fire on Yorktown, the Japanese thought it was one of the undamaged ships. Their bombings ended with Yorktown getting hit once again but Hornet and Enterprise remained relatively healthy.

The Japanese found it hard to put out the fires caused by the US attacks. A lot of things contributed to this issue. Like the infamous Zero fighter plane, the carriers had virtually no armor and suffered from shoddy construction. In addition, the water mains were damaged which made it become inoperable.

7. Hiryu Was Not Utilized Well

After the initial attacks by the US, the Japanese tried to quickly answer back. This careless move proved to be the start of Hiryu’s end. Instead of prioritizing its survival, they went and tried to fight the US carriers head-on. After receiving reports that they were outnumbered, the Hiryu had to get out as soon as possible. At that moment, it was already too late. The US collapsed on the Hiryu which led to its demise.

When it came to having the latest technology, the Japanese had a clear disadvantage. They lacked a very important piece of technology in their carriers – the radar. The Japanese Navy had to rely solely on human lookouts. They proved to be unreliable and it was already too late when the lookouts spotted the dive bombers on top of the Hiryu carrier.

Rear Admiral Tamon Yamaguchi was aboard the Hiryu until the bitter end. When the carrier was being scuttled, he and a few other members decided to stay behind and go down with the ship. This way of thinking was widespread among the Japanese servicemen. For them, dying in battle was the most honorable thing you could do for your country, and being a prisoner of war was discouraged. 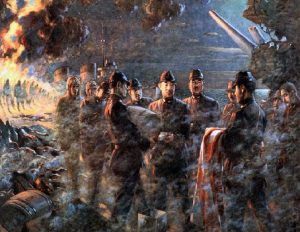 The Japanese Navy suffered huge losses during the campaign. In total, they lost 250 planes and 5 ships amounting to 3,057 deaths including 121 airmen. On the other hand, the US Navy only lost 2 ships and 144 planes for a total of 362 casualties comprised mostly of airmen (210).