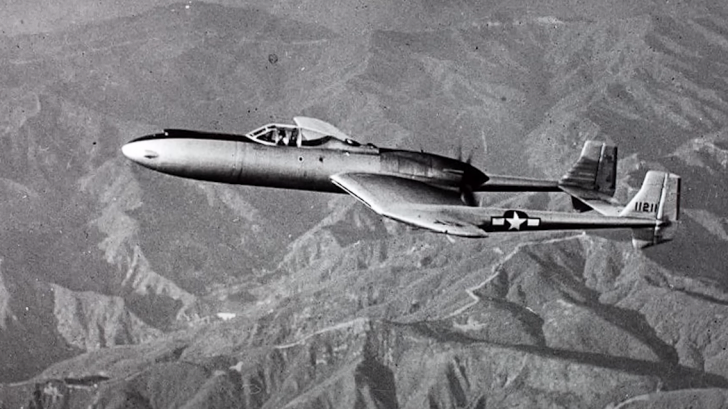 It started out very promising but it went downhill pretty fast. That is the story of the Vultee XP-54 “Swoose Goose”, one of the many warbirds that never saw action during the war.

The XP-54 was supposed to be the largest and heaviest single-engine plane made by America during WWII. On paper, the plane looked solid enough to be awarded a contract by the USAAF.

Its stroke of bad luck started out with its engine. The plane was to be fitted with the Pratt & Whitney X-1800 liquid-cooled engine. Unfortunately, Pratt & Whitney dropped the support and development of their liquid-cooled engines while the XP-54 was being developed. The engineers had to find a replacement to power the XP-54 and they settled with the Lycoming XH-2470 which was bigger and heavier than the previous one.

Because of the changes, its propellers also had to be replaced with a 4-bladed Hamilton Standard propeller. To add insult to injury, the role of the XP-54 was changed from low-altitude to high-altitude. A turbosupercharger had to be added to its engine along with heavier armor.

When flight tests were done, the XP-54 failed to deliver on its promises. It could only reach a top speed of 381 mph, 100 less than the expected max speed. In addition, its engine encountered problems and the turbosupercharger had its fair share of malfunctions during flight.

Due to the unsatisfactory results, it was canceled by the USAAF in 1943. In the end, the only redeeming quality of the XP-54 was its nickname. Add it to the list of warbirds not able to survive their production phase.