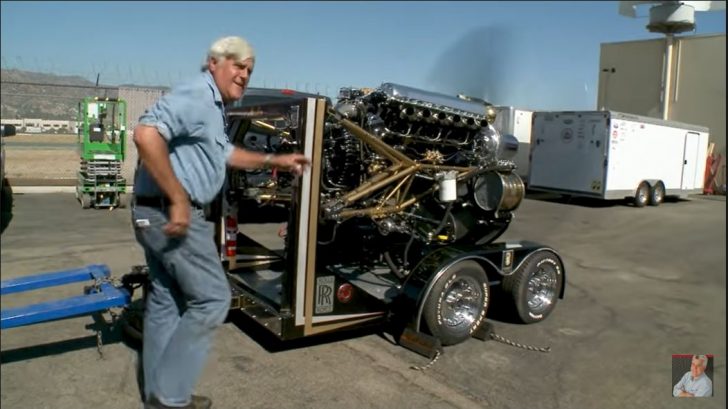 In another episode of Jay Leno’s Garage, American TV host Jay Leno showcases the power and incredible engineering of his Merlin 1650-1 engine. The engine was well-known to be the very heart of famous World War II planes, like the P-51 Mustang, and the legendary Lancaster bombers.

Here are ten fun facts that you need to know from Leno’s “Merlin” engine:

1. Jay Leno previously has two cars with a Merlin engine in it

These two vehicles are his 32 Rolls Royce and his big Bentley which were previously featured and seen on his restoration vlog.

2. His Royce Merlin (and Packard-built) engine was the new addition to the collection

The engine would appear in an airplane instead of an automobile. It has a designation V 1560-1. 1960 is the number of cubic inches, how big the engine is. The dash one signifies that it’s a single-stage two-speed, supercharger.

Since it’s for demonstration purposes only, the fuel goes on one side about five gallons, with the oil tank (holding five gallons of oil as well) on the other side. There’s also a pre-oiler where you can turn it on, and pumps the oil throughout the engine.

4. The engine was discovered in Georgia in the early 80s by a man named Graham White

White was also the one who also wrote a book about the Merlin engine, rebuilt the entire thing with a limited budget, and it ran.

If you plan to buy one of the Merlin engines, you’d need special tools and other things to rebuild it. You’ll also need special jacks to get the heads off.

6. When Jay Leno brought the engine from White, the engine was already a bit deteriorated

Thus, Leno sent it to his friend Jose who was a Merlin expert in California. Jose and his team then got the engine back to an airworthy condition.

7. The engine runs on aviation fuel

The engine uses 100 octanes of low lead fuel. According to Leno, you can run 87 gasoline on it as they did during the war. However, modern fuels aren’t good since they eat through very sensitive carburetors.

8. It has a single-stage, two-speed supercharger

9. There’s a fascinating “Merlin” community where everyone helps each other out

When Leno’s radiator got eaten away, he initially had trouble finding a replacement. He eventually located the Canadian Warplane Museum in Toronto, and the guys there gave him the radiator for his engine. He also enthuses that the museums rebuild WWII planes, and actually fly them.

It was used on a lot of aircraft from the period and is a beautiful piece of machine work.

So, there you have it. Those are some interesting facts about the Merlin engine. We also love the fact that Leno knows this engine from the inside and out!