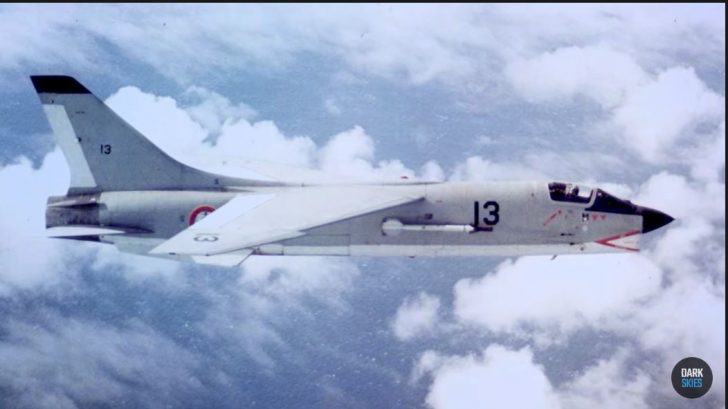 The Vought F-8 Crusader is a single-engine, supersonic aircraft built for the United States Navy and the Marine Corps and served principally for the Vietnam War. It was the only fighter plane during the war with guns and missiles.

Here are some interesting points about the F-8 Crusader, also known as the Last Gunfighter:

The aircraft had a powerful Pratt & Whitney J57 Turbo Jet engine producing up to 18,000 pounds of thrust. It made it the first fighter jet in the US arsenal that could climb up a speed of a thousand miles per hour. The plane also had a long range and could fly through any weather.

In 1956, Navy Pilot RW Duke Windsor and the Crusader broke international records after flying 1,015 miles per hour. Moreover, in June 1957, the aircraft covered 2,200 miles from the west to the east coast in only 3 hours and 28 minutes.

Although the plane was a favorite plane amongst pilots, it frequently suffered a lot of issues such as hydraulic fluid leaks and electrical system breakdowns. This resulted in the Crusaders having higher mishap rates.

The aircraft was also intimidating for the ground crew. Crawling down the engine intake was a scary experience, as workers feared being sucked in. Thus, earning its nickname, ‘The Gator.’

In fact, of the 1,261 aircraft built, 1,106 were involved in accidents. However, only a handful of these aircraft was lost in an enemy fire in the Vietnam War.

The crew was also told to avoid venturing into the front of the plane. Jet mechanic John Bourie recalled how he grabbed the pilot by the ankles as the air intake was sucking him in.

In March 1965, President Johnson sent the US Combat Force to Vietnam. Early on, it became a dominant aircraft dominating the MiG-17s of the north.

The F-8s became extremely lethal against the Vietnamese aircraft, bringing down 19 MiGs during the war and earning its nickname, the MiG Master.

The Sports Car of the Navy

Because of its supersonic speed and how it can take off safely with wings folded, many pilots call it the “Sports Car of the Navy.”

It had an adjustable wing tilt that allowed the wings to be pulled closer by at least 7 degrees. It also features 20 mm cannons, an excellent weapon for dogfights during the Vietnam War.

The F-8 Crusader was the first Navy fighter to stay in service for several decades. The Navy didn’t only use it but also the French Navy and the Philippine Air Force. Similarly, some variants were used the NASA.

Nowadays, this legendary aircraft can be found in museums and private collections. It’s also remembered as “The Last Gunfighter” since it was the last US fighter designed to carry four 20mm autocannons as its primary weapon.

Undoubtedly, the F-8 Crusader was a remarkable aircraft, playing a fundamental role in some of the most critical conflicts over the last 50 years.