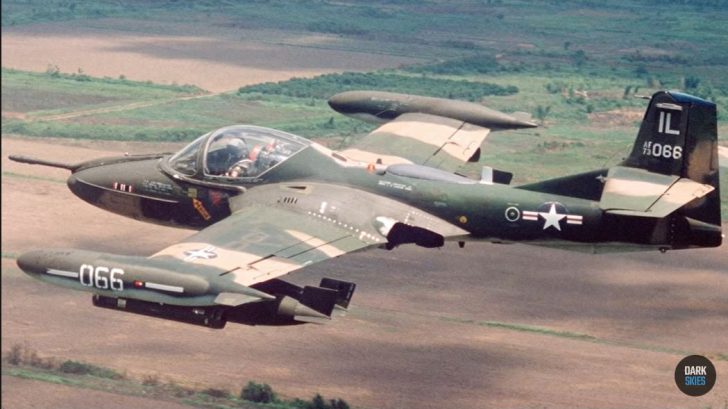 The A-7 Dragonfly, also known as the Super Tweet, was an American light attack aircraft that was introduced during the Vietnam War.

A lesser-known company, Cessna Aircraft, was commissioned to build a lesser-known yet effective aircraft of the war.

1. The A-37 Dragonfly was nicknamed the Super Tweet after T-37B Tweety Bird trainer

It gained its now famous nickname because of the T-37 Tweety trainer plane.

2. Its mission was to serve as an armed reconnaissance air support and escort for ground troops

However, it was not meant to sustain other aircraft sheet firepower or supersonic speeds.

3. Pilots were skeptical about its endurance in the Vietnam war at first

As soon as the Tweets were assembled and placed close to bigger, more imposing aircraft, many pilots became skeptical about it.

One of them was Lon Hultz, a Silver Star recipient and a Vietnam war veteran who was quoted saying, “We took a whole bunch of crap from them at the officer’s club. The fighter got a moniker upgrade from the Tweet to the Super Tweet. They call us the Mattel Marauders, too.”

The Super Tweet provided immediate air support and quickly proved capable of giving an excellent aim while in combat zones. Moreover, ground support knew they could always rely on it for cover.

5. On some occasions, pilots would fly low-level missions exceedingly close to the ground

During maintenance, engineers would find grass and tree limbs underneath the aircraft.

6. Its greatest benefit is its size

Despite flying slower than other aircraft, the enemy struggled to hit it.

7. Super Tweet pilots are grateful for the pole-vaulting climb-out rate

Sometimes, they were leveling off at 1,000 feet before approaching the end of the runway, making it difficult for infiltrated Viet Cong to aim.

8. The updated A 37-B Prototype that was developed had more thrust

The US later recovered around 92 Tweets. The Vietnam Air Force then used the rest over the Cambodia and China conflict in 1979.

Aside from the Vietnam war, another notable combat action that the A-37 took part in was the Salvadoran Civil war, where the Salvadoran Air Force operated the planes delivered against rebels.

One aircraft can also be found at the National Museum of the US Airforce in Ohio.
After the war, the planes were incorporated into the Air National Guard and sold off to countries with underdeveloped technologies.

Overall, the A-37 Dragonfly aka Super Tweet was a two-seat light attack aircraft that did a lot of close fighting in Vietnam. This counter-insurgency aircraft was used to fill in the gaps between support and offensive vehicles for military operations. The aircraft also managed to fill in the function gap between a helicopter and a warplane, reaching a middle ground regarding speed and power.