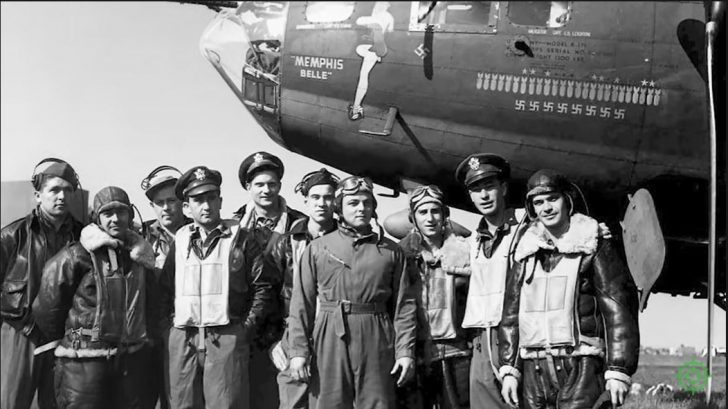 1. It was the first bomber to complete 25 combat missions across occupied Europe without a crewman being killed and return safely to the US

According to the crew, the Memphis Belle was able to accomplish this feat because of the mutual support and coordination from everyone on board without any exceptions.

2. It always managed to return to the base serious damage

The plane suffered bullets, shells, and lost its engine about five times. Yet, it kept returning to be repaired and always returning to service. The longest time spent on the repair was only five days waiting for a wing replacement.

3. It played a significant role in the war

Throughout its 25 missions, it delivered 60 tons of bombs across German, French, and Belgian territory. It managed to destroy aircraft plans, factories, and railway junctions, a move that helped cripple German-occupied Europe later on.

4. The Memphis Belle owned its name to a girl named Margaret Polk, a Memphis resident and Captain Robert Morgan’s sweetheart

Margaret’s picture is always present in the cockpit during every flight. It eventually became the aircraft’s lucky symbol.

5. Another lucky symbol is the famous emblem of a girl in a bathing suit on the nose

George Petty first created the iconic nose art for Esquire Magazine. After every mission, the crew would slap and kiss the curvaceous cutie for safely bringing them home.

6. Three time Academy Award-winning director William Wyler made a film about it

The idea was aimed to boost American morale and attract more volunteers. Another film, the Memphis Belle, was made in 1990 and co-produced by Wyler’s daughter.

7. Many thought it wouldn’t return from its final flight

The Memphis Belle wasn’t the first group of airplanes to return to the base. That’s why many thought that it would suffer the same fate as the Invader 2, which completed all its missions except its final one.

8. The US Air Force rewarded all the crew with the distinguished Flying Cross for their achievement

Out of the many awards given, only one Purple Cross was given, which was awarded only to servicemen wounded in combat. The crew then went on tours across the United States and were widely regarded as heroes.

9. It was almost destroyed but saved at the last minute

After the war, most warplanes were destroyed for scrap. Fortunately, the bomber narrowly escape its fate. The Mayor of Memphis, Walter Chandler, bought it and installed it on the pedestal in the city of Memphis.

Falling in a state of disrepair, in 2004, Belle was transferred to the National Museum of the US Airforce and underwent a restoration project.

10. It was a truly legendary aircraft of its time

During the air battle in Europe, the average lifespans for bombers were only 13 flights. On the other hand, Belle was able to survive 25 combat missions, a truly impressive feat.

The Memphis Belle was a plane in World War II that offered hope despite terrible human losses. It showed, although extremely difficult, that it could still complete the path to victory.