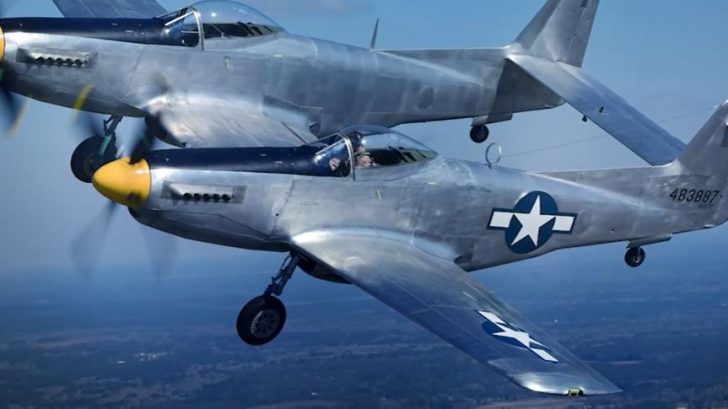 The fate of the F-82 Mustang was short-lived. It was doomed from the start as a short-term, short-gap aircraft, with other jet fighters replacing it as a bomber escort.

However, it remained an icon because of its innovative design and exceeding expectations during the Korean War.

The P-51 Mustang was one of the best piston engine fighters in WWII. It had a maximum speed of 390 miles per hour and a combat range of 750 miles with two drop tanks.

However, one fatal flaw is that the plane lacked a high-altitude supercharger. It couldn’t fly over 2,000 miles, the distance needed to be an escort in extended missions in the Pacific.

Despite the P-51s success, its maximum extended range of 1,615 miles with additional auxiliary fuel tanks wasn’t enough to escort the Boeing b-20 Superfortress. This was crucial to Operation Downfall when the US planned to invade Japan’s home islands.

In 1943, the North American aircraft started building a fighter that could complete the distance without refueling. Design chief Edgar Schmutz incorporated two P-51 fuselages and a common center wing, and had an additional fuselage plug behind the cockpit.

The aircraft was twice as heavy as the P-51 and had 6.5 caliber machine guns on the center wing. Moreover, it could carry 25 air-to-ground rockets. A British Rolls-Royce engine powered the earlier version, later replaced by the American Allison engines.

The P82 was an extremely versatile aircraft that served as an attack bomber, escort, fighter, interceptor, and reconnaissance aircraft. However, its original mission was eliminated after the atomic bombing of Japan and the end of World War II.

In 1947, it was given a second chance because of the Soviet Aviation Day parade incident when the Tupolev Tu-4, a piston engine Soviet bomber. It represented a threat of the Soviet nuclear attack. At that time, the Twin Mustang was the only fighter that could intercept the Tupolev.

The F-82 finally had its chance to enter combat during the Korean War. It provided ground support against North Korean activity—all in all, the F-82 squadron had 35 combat sorties during five days.

Despite the F-82 Mustang’s service during the Korean War, aircraft usage had been increasingly limited, along with jet fighters’ dominance. In August 1951, the last eight Twin Mustangs still in service were replaced by the Lockheed F-94 Starfire.

Today, you can see a model of the F-82 at the Wright Patterson Museum in Dayton, Ohio. You can also view the aircraft at San Antonio, Texas, at the US Air Force History and Traditions Museum.

Initially, he only intended to place some air under the wings to test the stick. However, the aircraft accelerated quicker than he expected. The P-51 flew, defying all expectations.