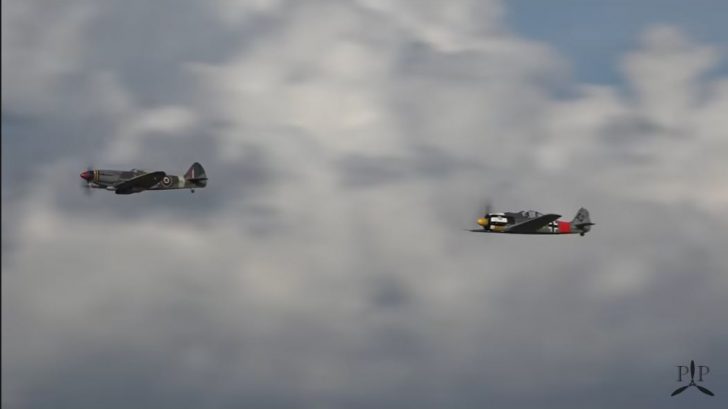 Located on the island of Usedom, Germany, Hangar 10 features a collection of planes from the World War II era, such as the Messerschmitt bf 109, to the Mustang P59 in one hangar. It is basically a playground for aviation enthusiasts!

During the Hangar10 Fly-In Exhibition in 2019, WWII aircraft Focke Wulf 190 18, flown by German pilot Klaus Plasa, engaged in a tail chase with another legendary aircraft, the Supermarine Spitfire Mk. 18, flown by Rob Davies from the UK in the skies.

The appearance of both planes almost reflects their countries- the Spitfire is simply pure class, while the Focke Wulf looked like an absolute machine.

Before take-off, the planes underwent pre-flight oil heating and a manual engine crank to release the oil from the lower cylinders. Fun fact- the Focke Wulf 190’s Ash 82-T 14cyl had a double row radial that had the power and size quite comparable to its original, the BMW 801 engine.