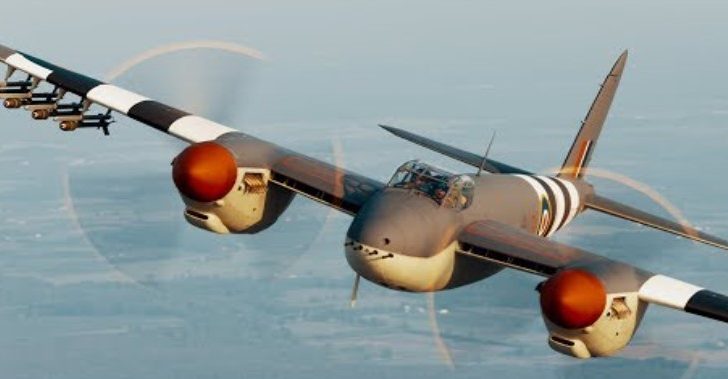 The de Havilland Mosquito is one of the allies’ most feared and lethal killers of World War II. Its revolutionary design made it the fastest aircraft of its time. It became a legend in its lifetime.

Here are the ten facts that separated the Mosquito from everyone else:

1. It’s built entirely out of wood

Creator Jeffrey de Havilland dreamt to build the fastest aircraft in the world entirely out of wood. He knew that a lightweight wooden aircraft is the key to increased speed. It was initially met with skepticism, with aero dynamists and military men ridiculing the idea. They challenged de Havilland that if a modern bomber is made of wood, how would it be able to protect itself?

2. It had no guns, no armor plating, and could carry up to 4,000 pounds of explosives

De Havilland told his critics that there’s no need for the Mosquito to protect itself. Its defense would be its speed. As for strength, he argued that timber had similar structural properties as aluminum and steel.

3. It was faster than any aircraft in the world during its time

De Havilland had done the impossible. He created the fastest aircraft in the world with a lightning speed of approximately 400 miles per hour.

4. Only the most experienced crewmen can fly it

The RAF saw the Mosquito as valuable. They didn’t want just anyone flying the “Mossie.” For the crew, it was unlike anything they flew before.

5. In an era of modern planes, the Mosquito is excellent in various combat roles, eventually earning the nickname “The Wooden Wonder”

Whatever role it was tasked to do, the Mosquito was ready to take on the challenge, and fight on Hitler’s doorstep.

6. It could drop bombs with pinpoint accuracy

Back then, bombers have to rely on several factors- luck, the weather, and the skill of the pilot to hit their target. The bomber version of the Mosquito only needs to rely on only speed and height to outrun enemy fighters.

7. It played a key role in the raid on the anniversary of Hitler coming into power

The goal wasn’t to hit the rally, but to create chaos and interrupt the broadcast.

Joseph Göring, one of the most powerful leaders in the Nazi party, said that it made him furious to see the Mosquito. And that he turned “green in envy that the Brits managed together to knock a beautiful wooden aircraft that every piano factory out there is building.”

8. The Mosquito bombed Berlin regularly, and was eventually known as “The Berlin Express”

The aircraft bombed Berlin 220 nights in a row.

9. It took down Hitler’s Terror Weapons

The V-1 Flying Bomb became Hitler’s Terror Weapon, equaling the Mosquito’s speed, and packed with high explosives. But only after nine weeks in battle, the Mosquito manages to take down 650 of these terror weapons.

10. It conducted daring low-altitude precision raids against the German Gestapo

In 1944, with 200 French men and women prisoners bound to be executed, “Operation Jericho,” was launched. The Mosquito bombed the walls of the notorious prison in France so that resistance fighters can escape. 255 prisoners of war managed to escape that day.

While initially greeted with scorn, it proved to be a deadly aircraft. The Mosquito became one of the most feared and lethal killers in World War II.