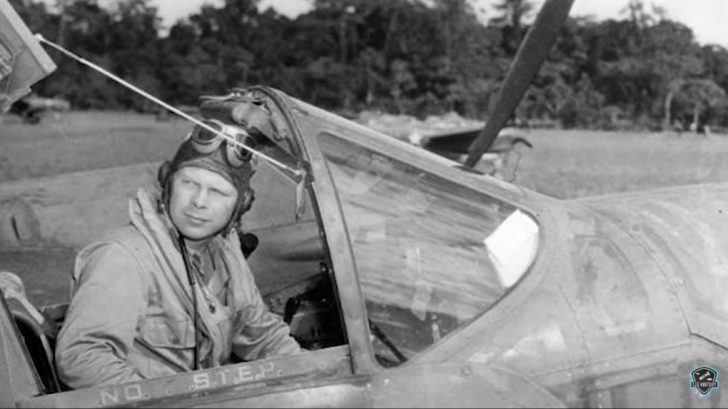 Richard Bong was known as the “Ace of Aces.” He was the highest-scoring US fighter pilot in history. His name was appropriately cemented in history books and the US Air Force records.

But do you know that this legendary pilot actually found himself in a dogfight, alone and outnumbered by the premier fighters of Japan?

Here’s how he took on nine Japanese Zeros with his P-38 and how he miraculously survived the encounter:

An Early Love For Flying

Bong was born in 1920 and was the youngest of nine children. His love for flying stemmed from his early childhood while he watched planes fly above their farm in Wisconsin.

In May 1941, six months before Pearl Harbor was bombed, Bong enlisted in the US Army Corps to fulfill his childhood dream.

Pride of the US Air Force

Bong would later take on Japanese fighters left and right with his P-38 Lightning, famously called Marge after his wife returned home.

Throughout his flying career, he managed to rack up an impressive 20 kills, surpassing the bar of an ace.

However, Bong would soon find himself in a dogfight that he would remember for the rest of his life. Bong vividly recalled that he was flying his P-38 with a wingman. But during this flight, they found a Japanese formation escorted by fighters, preparing to attack.

He briefly lost focus and fixated on the planes, and when he looked out in the cockpit, he was surprised his wingman wasn’t there. Instead, a Japanese single-engine fighter.

Bong rolled over his plane, dove, and did everything he could to get far from the Japanese aircraft. But when he looked forward, approaching the ocean, he saw nine more Japanese Zeroes heading in his direction. He knew that the only choice left in this situation was aggression.

Bong turned his nose to an approaching flight of Zeroes, despite being outnumbered and alone. He pushed the throttle up, heading straight to his enemy.

He immediately shot down one of the Zeroes, disorienting the Japanese pilots as they scattered in the sky. Bong took advantage of this and saw another fighter in sight, going for the second kill.

He found another opportunity with one more Japanese fighter, damaging it. However, Bong didn’t want to overstay his welcome and let the enemy gang up against him. So, he quickly roared away from the dogfight, leaving the Japanese aircraft behind him, and safely headed back to base.

A Tragic Twist of Fate

In 1945, Bong was pulled out from the frontlines as the US didn’t want to risk the life of their most famous aviator. However, ironically, this would lead to Bong’s tragic death.

He was acting as a test pilot for the new P80 jet fighter when it malfunctioned, crashing into the field below in a fiery ball. The legendary pilot was only 24 years old.