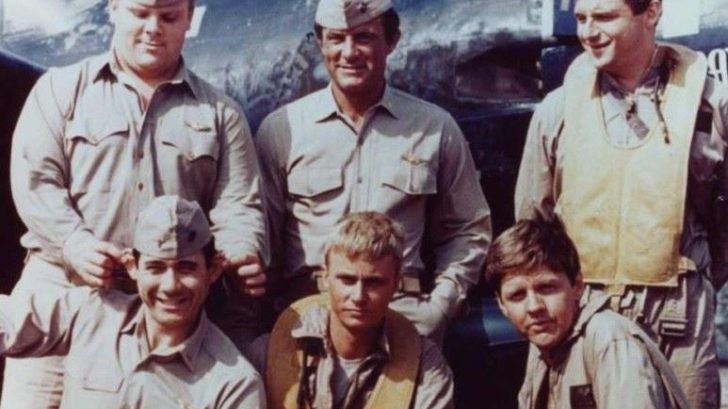 Most of the characters in the show were fictional. However, one character is based on a real WWII pilot named Greg Boyington. “Pappy”, as others would call him, was a WWII pilot known for being a rule-breaker, to put it quite frankly. His squad, however, wasn’t actually composed of a crew of misfits.

2. The Title Changed… Sort Of

Everyone is familiar with its original name, “Baa Baa Black Sheep”. In fact, it kept that name for two years, from 1976 to 1978. However, it was later syndicated as “Black Sheep Squadron”.

The real Greg Boyington was actually featured in the show. He had cameos in three episodes as General Harrison Kenlay. His first appearance was in the episode, “The Deadliest Enemy Of All: Part 2”. He later appears in the season 1 finale and the sixth episode of the 2nd season.

Conrad had quite a reputation and simultaneously was one of the biggest stars in Hollywood. He was known to perform some of his stunts and would sometimes have problems off-camera. Producer Stephen Cannell knew of his antics and it almost got in the way of Conrad’s casting.

Robert Conrad had plenty of chances to star in roles such as this. He had the opportunity to play Tony Nelson in the fantasy sitcom “I Dream of Jeannie” alongside Barbara Eden. Conrad refused to play the main character, fearing he would be overshadowed by Barbara Eden.

The show was competing with another show titled “Charlie’s Angels” for views. We now know how successful “Charlie’s Angels” is as a franchise. But back then, the WWII-focused show thought they could compete by introducing four nurses in the later parts of the show. They were named “Pappy’s Lambs”, a clear nod to the show they were up against.

Two dogs played Meatball, the Bull Terrier, in the show. Meatball was Pappy’s dog and the mascot of the squadron. One dog would be the “actor” that did scenes with cast members while the other dog, named “Bounty”, would be tasked to perform the stunts.

No actual Zeroes were used for filming. What they did was use modified North American T-6 Texans. These planes would later be used in other films such as “Tora! Tora! Tora!”

9. Its Theme Song Is From The Whiffenpoof Song

The theme song used by the show is actually a chorus from a song called “The Whiffenpoof Song”. It was sung by The Yale Whiffenpoofs, a collegiate a cappella singing group of Yale University. The song was published in 1909 and has been recorded by the likes of Elvis Presley Count Basie, and more.

No, it wasn’t Elvis Presley. Peter Frampton just released his album “Frampton Comes Alive!” when he played a British person living in the jungle for the series finale. He was a good sport, even offering to cut off his curly, blonde hair but the producers let him keep it.

There’s a lot more you missed in the show. Watch the video below to find out more!