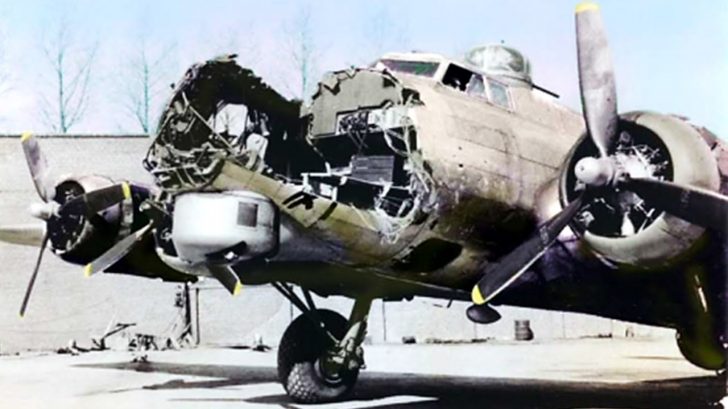 It had the number “666” on its tail which made everyone think it was bad luck to operate. Badly beaten and almost inoperable, it would still somehow fly back to the base for repairs. It was later sent to the back of the base to collect dust, waiting for its next crew.

Captain Jay Zeamer and the “Eager Beavers” were trying to find a plane for a photo-recon mission. He got wind of a certain plane at the back of the airfield that he could use. There, he found the B-17 waiting for him and his crew. Zeamer quickly went to work and modified the plane to his liking.

Bringing Lucy Back To Life

He stripped out any unnecessary things he thought were not viable. They also replaced the four old engines with newer ones, hoping to make the plane faster. To top it off, the crew also added more guns to bring the total to 19 .50 cal machine guns.

The crew was tasked to map the coast of Bougainville Island solo. The Japanese saw the lonely B-17 and sent out 17 Zeros to deal with it. The Zeros quickly surrounded the bomber until one decided to fly in front of the B-17. It was shot down by the gun on its nose while another was hit by the bombardier’s guns. In total, 5 Zeros were supposedly shot down by the crew. The B-17 was pelted by the Zeros until it was able to outlast the Japanese and land on a friendly airfield.

It managed to come home with five 20mm cannon hits and 187 bullet holes. Bombardier Joseph Sarnoski died due to a shrapnel hit. The rest of the crew received the Distinguished Serve Cross while Sarnoski (Bombardier) and Zeamer (Pilot) were given the Medal of Honor.

More information about the encounter can be found in the video below or by reading the book “Lucky 666” by Robert Drury.