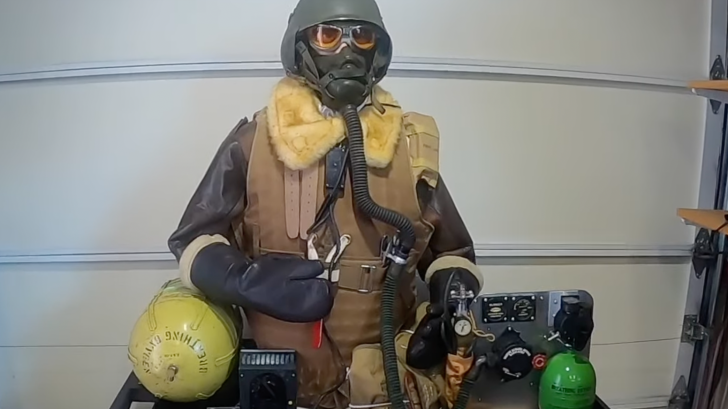 Bombers operated between 25,000 to 35,000 feet. Now, that wouldn’t be such a problem if the plane was pressurized but the B-17 was not. Therefore, crew members had to breathe in supplemental oxygen so as to not pass out and die during missions. It only took a minute for someone to pass out and around 19 more minutes to die. In response, the crew had to do oxygen checks every 15 minutes starting from the tail to the cockpit.

Oxygen regulators were used to mix pure oxygen with the ambient air inside the cabin to feed the correct mixture to the crew members. Blinker gauges are used alongside the pressure gauge to provide a way of knowing if the oxygen system was working.

Bombing missions could take hours to complete. That’s why you can find 18 G-1 oxygen cylinders inside the cabin to help the crew last longer. Each cylinder could last a crew member four hours before it runs out. Smaller but refillable F-1 tanks used by ball gunners only lasted for 2 hours. These tanks had encircling bands and six longitudinal reinforcing ribs around the circumference for reinforcement.

If a crew member needed to walk around the cabin, they could use a portable green bottle to get their oxygen supply. These bottles could stay attached to the flak vest if needed. An H-1 Bailout bottle can also be used to prevent them from passing out in free falls during bailouts.

85% of the crew’s wounds were due to low-velocity projectiles (fragments and aircraft pieces too) and only 15% were due to machine gun bullets. This study led to the design of the Flak armor vest and helmet which were credited for the 60% reduction in wounds.

Since the cabin was unpressurized and virtually unheated, they had to wear thick layers of clothing to counter the cold. Electric heating suits were used to provide well-deserved heating and fleece gloves, jackets, and boots were worn on top of it. The suits would be connected to a heating system that they could adjust to their liking.

Gunners need to continuously scan for danger and doing so would mean a lot of head movements. These movements could chafe their necks due to the jacket’s collar. They found out that wearing silk scarves would be a great way to prevent chafing and up the fashion standards.

T-30 throat mics and headsets were utilized for communication. The interphone system was used by all crew stations. “Command” and “Inter” could be accessed by everyone. “Liaison” was only for pilots, navigators, and radio operators, while “Call” was for overriding all communication.

These two can be found under the flak vest. Due to the nature of their missions, they had to keep their chest parachutes as close as possible. The harnesses would make attaching the parachutes faster and easier.

Various types of goggle lenses were worn depending on the mission. Dark green for bright sunlight, amber for foggy weather, and clear lenses during night missions.