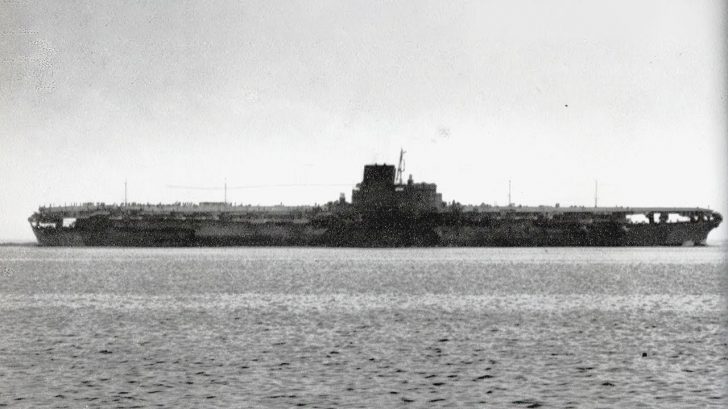 The might of the Imperial Japanese Navy was too much for countries in the Pacific at the time. However, the results of the Battle of Midway weakened their power. “Shinano” was supposed to be the ultimate ship that would rule the Pacific. It was so highly regarded by the government that it was kept secret during construction, even going as far as building walls to cover the dock.

Shinano should have been the third Yamato-class battleship but was instead converted to a carrier to make up for the fleet carriers lost at Midway. The ship was well into construction when the decision was made so instead of being a fleet carrier, it could only be a support carrier.

It could carry 2,400 men and was the heaviest carrier built at 81,000 metric tons until USS Forrestal was introduced in 1954.

The ship had its fair share of design flaws. Like the Yamato-class battleships, the joint between the waterline armor belt and its anti-torpedo bulge was poorly designed. Poor construction also led to water leaks through the “water-tight” doors.

On November 28, 1944, the Shinano departed from Yokosuka due to the threat of bombings. Toshio Abe and 2,175 men alongside 300 workers and 40 civilians set sail to Kure. Hours after their departure, an American submarine (Archerfish) picked up Shinano on the radar and pursued the fleet of Japanese ships. As Shinano’s bearing overheated, the Archerfish had the chance to catch up. The submarine fired 6 torpedoes, hitting the ship 4 times before diving to 400 feet.

The ship sank hours later with 1,080 survivors while Abe and his navigators chose to go down with the ship. The survivors were isolated to hide the loss of the carrier while efforts were made to strike it off the Naval Register.