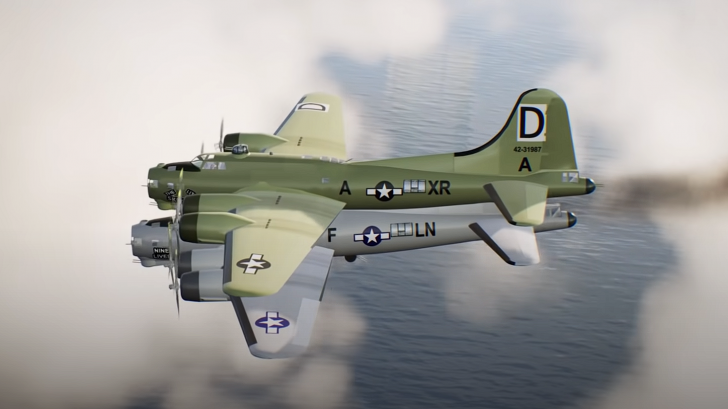 On December 31, 1944, Glenn Rojohn and his crew were in their B-17G for a bombing mission over Hamburg. This time, the Germans fought hard and met the bombers with anti-aircraft guns. The number of Flak shells in the air severely hampered their visibility and coordination.

While on their way back to England, the bombers were met by German Bf 109s at 20,000 feet. These fighters were too aggressive against the bombers who had no choice but to push through it and stay in formation. Rojohn was quoted saying they got too close that he could see the faces of the German pilots coming towards his plane.

During the midst of the chaotic battle, Lt. William McNab tried to fill in the empty space caused by the loss of another plane in the formation. McNab’s plane (Nine Lives) collided with Capt. Rojohn’s B-17. Suddenly, Nine Lives was at the bottom and The Little Skipper was at the top. According to witnesses, it looked like two dragonflies mating.

McNab and his co-pilot later succumbed to their injuries so it was up to Rojohn and William Leek, his co-pilot, to try and fly two planes at once. They had the idea to turn back to Germany and turn off their own engines, letting the other B-17’s engines to operate alone. The two bought time for six of their crew and four of the Nine Lives crew members to bail out.

With their crew out of the picture, the two men had to do the impossible – land their aircraft and survive. McNab’s plane hit the ground first and exploded, vaulting the other B-17 forward. Somehow, only the nose of their plane was relatively intact and the two men survived. In total, 10 men survived the incident and were all captured by the Germans. Glenn Rojohn was awarded the Distinguished Flying Cross for this achievement but he never forgets to give credit to his co-pilot, William Leek.

This video from Yarnhub gets into the story a bit more along with great visuals. Learn more about this one-of-a-kind incident by watching the video below!