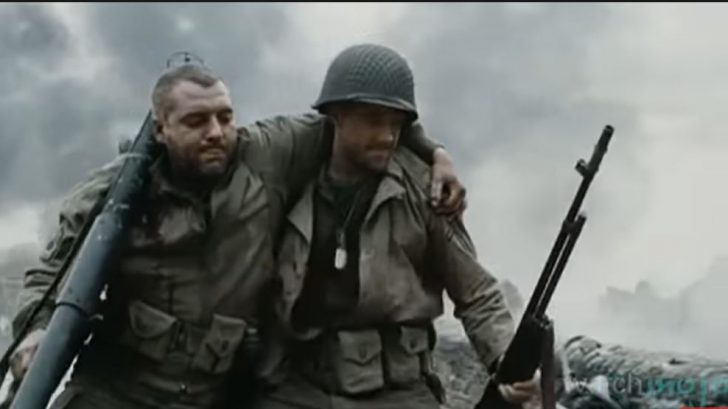 D-Day marked the beginning and the end of World War II. Over the years, filmmakers created films that captured history’s darkest chapters.

Here are the top 10 World War II movies ever made:

The movie follows the final 10 days of Adolf Hitler’s life. He and his Nazi army operate from a bunker, while the allied forces are closing in. He defends Berlin but eventually meets his downfall (like the name of the movie.)

This alternate history story is about a Jewish retaliation against Nazi, Germany that makes a mark. Aldo Raine (Brad Pitt) is the leader of this vengeful bunch. This fiery film recaptures the WWII era.

This patriotic biopic this movie retells the story of American General George S. Patton. One of the major players in WWII, the general was the ace of the American troops. While the audience may sometimes hate his outspokenness and guts, viewers eventually understand this legendary man’s pragmatic magnetism that caused men to follow him everywhere.

Vladislav Spillman’s story was so personal and painful. A Polish musician as he flees from one hiding place to another. While a naturally gifted pianist, fear prevents him from playing. But when music is heard it’s beautiful yet haunting, much like the movie.

When the Burmese railroad construction reached the shores of river Kwai, the responsibility was given to Japanese Colonel Saito. He then passes the labor of the captured British soldiers. The British built the bridge as a testament to their ability. This is a tale of individual pride and national patriotism.

Captain Hilt (Steve McQueen) leads an escape attempt from an inescapable camp. They eventually manage to dig a tunnel out of the prison grounds, only to find that the stakes are higher when they escape.

Dubbed one of the greatest movies of all time, this American romantic film stars Ingrid Berman and Humphrey Bogart, two old flames crossing paths again in Northern Africa in the Moroccan city of Casa Blanca. The movie is a conflict between love, virtue, and exercising doing the right thing with WWII as its backdrop.

Also known as The Boat. The movie is a representation of the chronic tedium that seafaring soldiers felt. The ship’s captain, ((Jürgen Prochnow) tries to keep the ship’s morale high even in the face of dwindling supplies, and the fiercest battles they encounter at sea.

Creator Steven Spielberg initially was unsure if he could create a movie about the Holocaust, but he came up with one find masterpiece with Schindler’s List.

Tom Hanks and his squad travel overland and go through all kinds of danger just so they can find one man- Private Ryan. This story is a reminder of the sheer scale and significance of WWII. Definitely, a must-watch- Steven Spielberg’s direction is glorious.