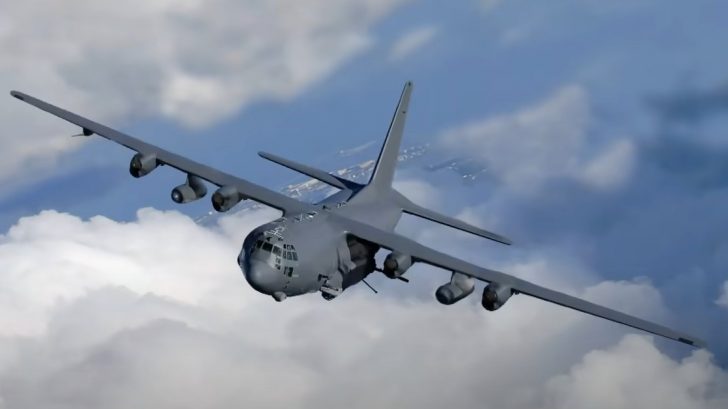 The AC-130 is a guardian angel to its allies, but to its enemies, it’s an angel of death. Here are the ten facts about the AC-130 gunship that makes it a monster:

Thirty-eight feet tall, with a 133-foot wingspan, this heavyweight aircraft is tough to miss.

Its primary mission is to support ground troops from the ground, keep them safe, and bring them home alive after a mission.

It has a mass payload of 155,000 pounds, allowing the aircraft to carry more weapons, crew, and ammunition than any rotary wing gunship.

3. It has the largest aircrew in the Air Force inventory than any other combat aircraft, flying with 13 crew members

In the cockpit, two pilots and a flight engineer monitor the aircraft systems.

Behind it, the heart of the gunship can be found, known as The Booth. Five crew members can be found here. Two sensor operators scan the ground for threats, passing the info to the navigator, who validates the target. It’s then up to the fire control officer to choose the weapon. The electronic warfare officer acts as the defense- keeping an eye on the ground for threats.

Three gunners can be found at the back of the aircraft. There’s also two crew members look for the right and rear scanner bubbles for possible threats.

The back is the gunship’s specialty, the deadly 105 mm. Howitzer. It’s the biggest gun on the gunship, and its firepower is unmatched by any other airframe.

This massive canon can fire at least ten rounds per minute. It then recoils with enough force to bench press over 20,000 pounds.

It actually took the Air Force more than 50 years to admit that they needed a gunship at all.

6. The only drawback is its size

The size of the plane left a bigger radar signature. Thus, making it a little bit easier to shoot. It also needs to fly low and slow for its gunfire to be accurate, making it even more vulnerable to enemy fire.

7. During the Vietnam War, AC-130s took the Vietcong by surprise

During its first nine months in service, the gunship manages to destroy 228 enemy trucks that carry ammunition on the Ho Chi Minh Trail.

8. Played a crucial role in Operations Just Cause

The AC-130 again began to showcase its worth on December 20, 1989, during a Panama City operation wherein US forces invaded, searching for dictator Manuel Noriega.

During the mission, nine AC-130 gunships fly over Panama to back them up, proving that they can rule the skies. It only took less than five days to win the ground war.

9. It was used in Operation Desert Storm

AC-130s engaged in Sadam Hussein’s Iraqi convoys and armored vehicles in Khafji before they crossed over to Saudi Arabia. The gunship pounds the brigade. Less than an hour later, the convoy is stopped in its tracks. However, more trucks are on the way.

Low on fuel and daylight breaking in, leaving the aircraft exposed, Col. Paul Hubbel and his crew decided to return to base. The next day, another AC-130 was shot down by the Iraqi forces in broad daylight and lost its entire crew.

Learning from the mistakes from the past, the gunship was revamped. The initial 20 mm gun was replaced by a 25 mm, making it even deadlier. It can also make a dual target attack where it could track and fire two different targets simultaneously.