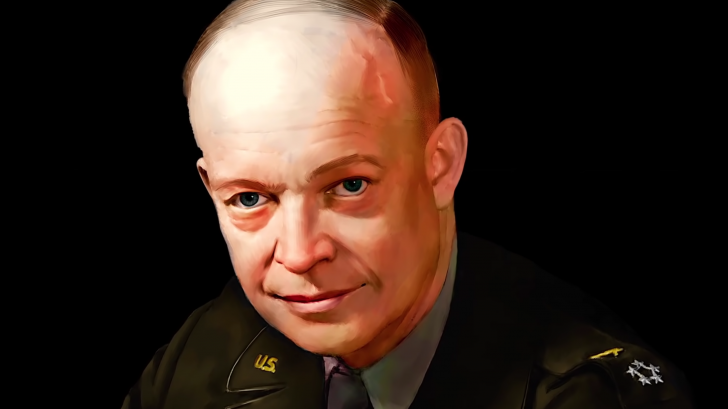 1. He Was A Visionary

While spending some of his younger years in junior officer training, he trained units and various regiments while under a supply and logistics role. During this short amount of time, he saw the value in developing tanks and firepower than infantry offensives.

He trained tank regiments in Georgia (1917) and Pennsylvania (1918) before being posted in Camp Meade in 1919. There, he helped orchestrate a transcontinental vehicle convoy from Washington, D.C. to San Francisco. The unpaved road stretched for 3,200 miles and resulted in a 62-day journey. This would later help him in designing the National Highway System.

Living so close to Greg Patton, Eisenhower quickly built a rapport with his famous neighbor. They both shared enthusiasm for experimenting with military strategy and equipment. This relationship would help Eisenhower meet other influential military figures later in his career.

In the 1920s, his views on military development and his emerging promise as a leader, administrator, and strategist drew the attention of Fox Conner. He was assigned as Conner’s Executive Officer in the Panama Canal Zone. At this time, Conner shared tactics of battle, success, failures, and the heavy decision-making he would need to do later on.

5. Graduated Top Of His Class

He was admitted to Command and General Staff School at Kansas where he studied army tactics, operations, and problem-solving. He graduated first in a class of 275 students two years after in 1926. In 1928, he enrolled in Army War College in D.C. and again graduated top of his class that same year.

As MacArthur’s assistant, he formulated policy and mobilization strategies for a potential war. While accompanying MacArthur, he learned how to compromise, conciliate, and negotiate. He even maintained cordial relations with people that despised him.

7. Head of the War Plans Divison

Five days after the bombing of Pearl Harbor, Eisenhower was given the opportunity to lead all US forces in the European theater. George Marshall knew Eisenhower’s ability to plan, organize, and facilitate the execution of military policy and maneuvers. For Marshall, he was the best man for the job.

This was the largest amphibious invasion in military history at the time and he was up against the Desert Fox, General Erwin Rommel, and his tanks. Though the Allies won and a million German men were imprisoned, Eisenhower was criticized for his indecisiveness along with his lackluster logistical and personnel management. He sought to fix those mistakes going forward.

60 German divisions led by Rommel were waiting for Eisenhower. He planned and organized the invasion meticulously by implementing lessons he had learned in the past. Before the actual invasion, he dropped parachuting dummies and deployed inflatable tanks to keep the Germans guessing. He even ordered airdrops of metal strips, created fake radio traffic, and sent in German “spies” to tell them false plans and movements.

With their backs against the wall, the Germans sent out Panzer divisions hoping for a victory. However, Eisenhower was assigned to fortify Allied defenses in key locations in the Ardennes region. The Allied forces defended and stood their ground until the Germans retreated. This event was his only test as a field commander on the ground and he proved to be worthy of this role.

In his later years, he would run and serve as the 34th President of the United States of America. He had a tactical mind only a few could ever dream of having. The lessons he learned throughout his journey paved the way for his accomplishments later on.