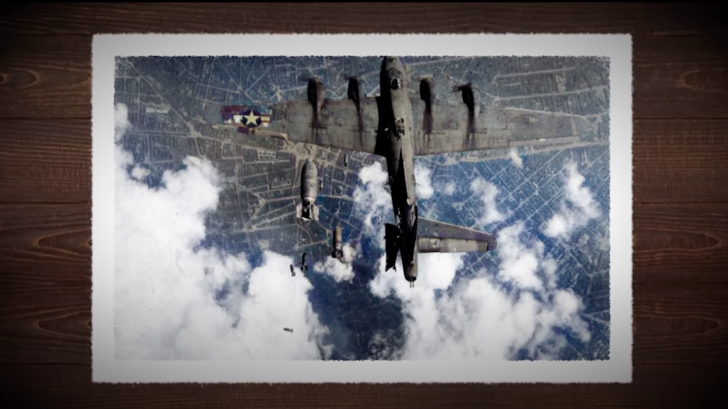 On May 19, 1944, the 331st Bomb Squadron of the 94th Bomb Group journeyed towards Germany from a base in England. That day, B-17 bombers were tasked to go over Berlin for a bombing mission. One of the participating B-17s, named Miss Donna Mae, was piloted by First Lieutenant Marion Reid. They were met with flaks as they entered Germany – nothing they haven’t experienced before.

In order to avoid friendly fire, all of the participating bombers needed to enter into a formation meant to streamline the delivery of payload. They were to be placed in different altitudes and patterns in groups of three, spanning 850 feet tall and grouped close together so gunners can focus on one specific target at once.

When the signal to drop the bombs was heard, the B-17s hurried to let go of their payload. Amidst the chaos, a B-17 named “Trudy” had accidentally gone out of formation and was now flying on top of Miss Donna Mae. When Trudy’s bombardier saw the unsuspecting B-17, it was already too late.

The Fate of Miss Donna Mae

As Trudy’s bombs were let go, her bombardier saw them go one after the other, nearly hitting the other B-17 until one finally hit. The bomb didn’t explode but it hit the left horizontal stabilizer of the Flying Fortress. Miss Donna Mae quickly spun out of control and was headed to the ground.

Because of how turbulent its descent was, the 11 crew members of Miss Donna Mae were unable to get out in time. They crashed onto Oderberge Strasse, Berlin, and all of them were said to be killed in action.

This is one of the saddest cases of documented friendly fire. Trudy’s bombardier had to live with what he saw with his own eyes that day.