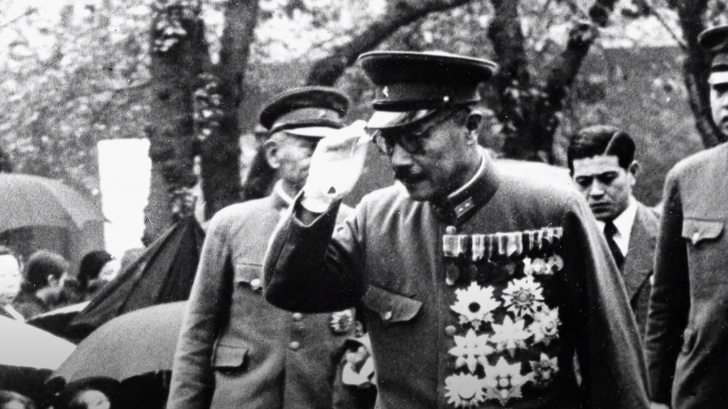 The Kempeitai rivaled Hitler’s Gestapo in terms of their heightened surveillance and paranoid behavior. They would beat suspects severely before asking questions and were known to get information by beatings and torture, making it one of the most sadistic police forces in human history.

Though he did not play a huge role in the Rape of Nanjing, Tojo still supported the Japanese Empire’s decision. There are no words to describe how much the people of Nanjing suffered during those three weeks. 300,000 Chinese people were killed and 20,000 women were raped during this period. They were buried alive, set on fire, disemboweled, beheaded, and if they were lucky – shot. This is still one of the most baffling displays of human cruelty ever documented in modern history.

Burn all, loot all, and kill all. That was what Tojo planned to do to quell the Chinese from supporting guerillas. This policy would lead to the utter destruction and devastation of Chinese villages just to stop them. An estimated 3 million Chinese people died under Tojo’s policy.

Now a Prime Minister in 1941, Tojo ordered his Kempeitai to build a laboratory for research and experimentation. Its primary goal? Experimenting on humans without anesthesia, and the research and manufacturing of biological weapons. 12,000 innocent people died a horrible death due to these experiments.

By 1941, Tojo was ready to enact his master plan – a surprise attack on Pearl Harbor. The infamous attack on Pearl Harbor forced the United States to join the war. Tojo thought it would cripple America but it just inspired its citizens to fight for their country. This plan was arguably what started the downfall of the Japanese Empire.

When Singapore fell in 1942, British servicemen receiving medical attention at the Alexandra Hospital waived the white flag to surrender to the Japanese. At that time, the Japanese soldiers were encircling the hospital preparing to attack. They (unsurprisingly) did not honor the surrender and massacred every patient and staff inside the hospital.

7. Behind The Bataan Death March

The ending of the Battle of Bataan was somehow more horrific than the actual battle. 80,000 POWs were sent from the battlefield and to the prison camps using their own feet. Thousands of men marched for 60 miles with their wounds rotting for each passing hour. Roughly 10,000 POWs died during the march.

He truly believed that there was one superior race – the Japanese. Tojo would encourage the unlawful killings, torturing, and starving of anyone that threatened the rise of their race. We know that he fully knew what his army was doing as he received regular and detailed reports of their movements.

After the Battle of Midway, Tojo felt embarrassed about his defeat. To gain the confidence that he lost from the public, he instilled and hammered nationalism into every Japanese’s heart. Suddenly, everyone had to go to war or do their part, and teach the younger generation to be soldiers of the Japanese Empire.

Japanese propaganda convinced the occupants of Saipan that the Allied forces were evil in nature. It was rumored that if they were to be caught by the Allies, the women would be raped and the children would be devoured. Believing in these lies, the Japanese jumped by the hundreds when the Allies took over the island. An estimate of a thousand people died due to suicide that day.