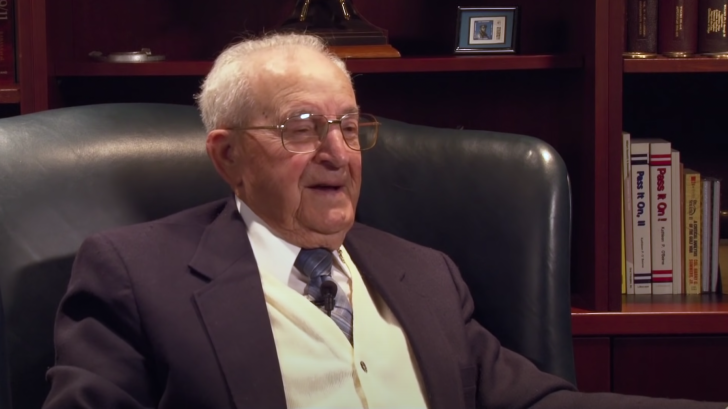 You can’t help but smile at how energetic and proud Francis “Jeep” Sanza is. His enthusiasm to answer these questions is infectious!

1. He’s A Good Driver And Mechanic

What can you expect from a guy nicknamed Jeep? He even boasts that he could take out the engine in 40 minutes by using a special wrench that a guy from Willys(-Overland Motors) gave him.

“Take off four bolts from the transmission, take out the radiator, disconnect the manifold, and pull out the engine!”

2. It Was Strictly Business

Sanza recalled how everything he and Patton talked about was war. Their personal lives were rarely (if ever) discussed and they were fine with leaving it at that. For Sanza, he’d rather be left alone to focus on driving, and that he did.

3. He Heard The News Too

When Patton heard the news that the Soviets were to conquer Berlin and he wasn’t allowed to go, Sanza saw how that affected him after hearing the orders from the radio. He knew how much Patton wanted to personally go to Berlin, even claiming that the General was teary-eyed from the news.

4. Patton Didn’t Want To Hear It

According to Sanza, Patton would turn off communication connecting him with the other generals. Patton knew what he was doing and what he wanted to do. He would only use the radio to check for any incoming messages.

5. Truth About Patton and the Shell-Shocked Soldier

Patton saw a soldier who was nervous and shaken up. After asking what was wrong with him, Patton took off his glove and flicked it at the soldier’s helmet. It hit but didn’t injure the already shaken-up soldier. That’s far from what the media described it as!

Though he did have controversial opinions and actions, the soldiers under him liked the way he led. Take it from his driver, Jeep, who speaks nothing but good things about the late General.