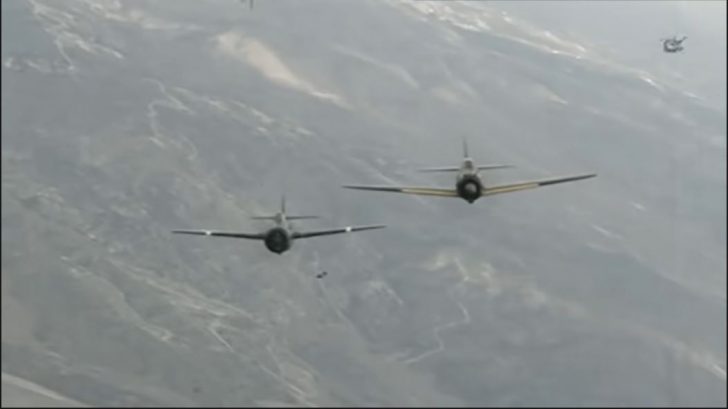 In the skies of the Guadalcanal, two fighter pilots engage in a legendary dogfight of the Second World War.

In a desperate dog fight, one pilot tries to lock the other into one’s gun sights. But then, when they have a perfect shot, they don’t go in for the kill. By the end of the battle, each plane is riddled with bullets, and they survive.

Here are the ten interesting facts about the dogfight over Guadalcanal:

1. It was one of the most epic battles of all time

In 1942, two rival fighter planes fought for supremacy of the skies in the war over the Pacific- the Japanese Zero and the US Navy’s Wildcat.

On that day, two outstanding pilots were in the air- Saburō Sakai and James ‘Pug’ Southerland.

2. Each pilot had admired their opponent’s courage, tenacity, and flying skills

Both realized that they needed to push their planes to the absolute limit. At 25, Sakai was already a proven ace with over 50 kills.

On the other hand, Pug Southerland was one of the best shots in his squadron. While he had no combat experience yet, he was desperate to engage with the enemy.

3. It was the longest sortie Sakai has to fly

When they started shelling the islands and Guadalcanal, the Japanese were overwhelmed. They radioed for help to the nearest base 565 miles away in Rabaul.

The base commander, Rear Admiral Yamato, however, faced a problem. Being too far away, Guadalcanal reached the absolute limit of his Fighters.

Nevertheless, Sakai and 17 fellow pilots were ordered to get ready to fly there. It looked like a suicide mission.

4. In contrast, the Wildcat was at a serious disadvantage to the Zero

Without drop tanks that fit under the wings, the Wildcat had a combat radius of about 200 nautical miles.

While it was a fair representation of most Fighters during that time, the US almost knew nothing about the Zero. It could fly 500 to 550 nautical miles (one way,) engage in a dogfight, and return to base all on one tank of gas.

5. After the failing to hit the moving US ships, and the failure of their mission, Sakai was desperate to take down enemy aircraft

Searching for the sky, he spots an extraordinary dogfight several hundred feet below. It was Pug Sutherland, neatly invading several Zeroes.

Sakai dives in and fires a burst for long range, beginning the epic battle.

Pug retaliates immediately by climbing towards the belly of Sakai’s Zero. Sakai tried to throw Pug off, but Pug matched the Zero turn for turn.

6. Sakai pumped 200 runs into the Wildcat’s cockpit, watching the bullets hit the thin metal skin and shatter the glass

But instead of turning into a ball of fire, the Wildcat continued flying almost as if nothing had happened. Sakai couldn’t believe what he saw.

This is mainly because the Wildcat’s manufacturer, Grumman, designed a cockpit that can handle a lot of punishment. Small bullets had minimal impact on the heavily armored Wildcat.

7. Both pilots found themselves in an unbelievable situation

For him to fill his gun sight for a cannon burst, the Zero’s more lethal weapon, Sakai accelerated closer to the Wildcat. But Pug was about to put the brakes on. The Zero found himself 10 yards away from the Wildcat, trying to slow down.

Pug executed his trap well since the Zero is now in his gun sights. But just when Sakai braced himself for the worst, nothing happened. The Wildcat’s guns remained silent.

But the question is, why?

However, aviation archaeologist Ralph Wetterhahn thinks, based on the evidence gathered on the crash site, that when 7.7 mm bullets hit Pug’s plane, one penetrated the Wildcat’s wing, causing a round of machine gun belt to explode, jamming the gun, Sakai’s life was probably spared. Primarily because of the Wildcat’s machine gun damage.

Meanwhile, Sakai couldn’t believe his luck. He immediately took evasive action to avoid being in the line of fire, drew up alongside Pug’s plane, and saw Pug was wounded- a blood stain on his right shoulder. For a moment, Sakai hesitates to fire.

9. But when Pug jerks the Wildcat into a climb, Sakai knows the plane must be destroyed

The Japanese aimed at the engine, causing a burst on the left-wing route, and Pug dove over the right side. Pug manages to open his parachute less than 400 feet above the jungle canopy. As he falls, Sutherland sees his plane explode.

Surviving this narrow escape, Sakai could have turned around and headed home. But he wasn’t finished yet. As he searches the skies, sawing eight dots. He initially thought they were fighters, but they turned out to be dive bombers, with tail gunners pointed at him. Sakai got hit, leaving him seriously wounded.

After an epic 5-hour flight, Sakai, blind in one eye, paralyzed on one side, and barely conscious, finally brings his plane down at the base at Rabaul.

10. Both men recovered and went flying on to more combat missions

With only one eye, Sakai went in for more kills. By the war’s end, he became the Japanese Navy’s highest-scoring ace with 64 allied planes. Meanwhile, Pug became an ace and was awarded the Distinguished Flying Cross.