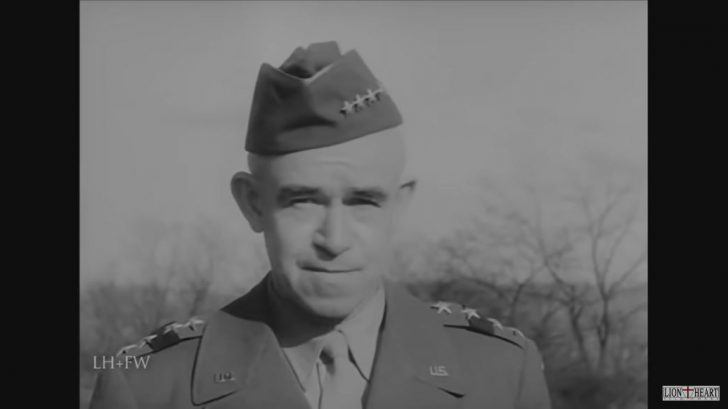 Recognized as a master strategist, Bradley was given command forces that spearheaded and carried through victory the campaigns and the invasion of Nazi-occupied Europe.

Here are the ten things that made this soft-spoken general so great:

1. No other American General had exercised direct field command over so many combat troops

He was in command of all the US ground forces invading Germany. He was the commander of 1. million men and 43 divisions.

2. He was to serve as general under not one President- but three

In addition to Harry Truman, he also served under the administration of Dwight T. Eisenhower, his wartime chief, and wartime President, Franklin Roosevelt.

3. He graduated in a 1915 class in West Point that contained many generals

Overall, the class had 59 generals, with Dwight Eisenhower and Bradley becoming generals in the army. Historians refer to it as “the class the stars fell on.”

4. His former commander served under him during the war

Bradley’s former commander, General Payton, did serve under him throughout the remainder of the war. He commanded the 3rd army.

5. He wasn’t known as a sit-back at headquarters type of general

Bradley inspected battles in person, traveling in an ordinary jeep.

6. Despite knowing to have a more reticent and calm personality, Bradley relieved more senior commanders and generals than his predecessor

While General Patton is often thought of as a somewhat impulsive and intolerant commander, the quiet Bradley relieved more officers from their positions during World War II. On the flip side, Patton only relieved one general from his command.

7. Bradley was the last of only nine people to receive the five-star rank in the US army

He was promoted to “General of the Army” in September 1950. He was then the fifth and final person to attain the position.

Bradley became a globetrotter, some kind of soldier diplomat. For instance, he went to Germany to discuss plans for collective security with member nations of the North Atlantic Alliance- insurance against aggression from Soviet Russia.

9. He wasn’t a fan of General Douglas MacArthur and played a crucial role in having President Truman dismiss MacArthur as the commander of the Korean theater

Bradley believed that MacArthur’s strategy would get the US into the wrong war and the wrong enemy. He paid almost 300 visits to the White House. Many of those visits were to brief the President on the war in Korea.

As a global military strategist, he believed the US shouldn’t press its military advantage too far in this one area of communist aggression. Truman relieved MacArthur from command in April 1951.

10. He earned the nickname, The GI’s General

Ernie Pyle wrote numerous dispatches that referenced Bradley as The GI’s General. This nickname eventually stuck with Bradley throughout his military career.

There is no doubt that Omar Bradley has come a long way from his humble roots as a farm boy and rose to the army’s top ranks as a well-decorated general.