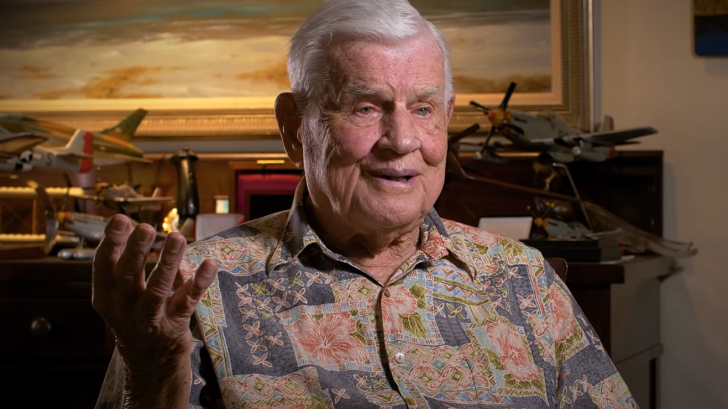 1. He Wasted No Time Enlisting

Bud knew that the war would somehow rope in the US after seeing Hitler’s rise to power. When the Japanese attacked Pearl Harbor, he was working at the Sacramento Air Depot. As soon as he was of age, he volunteered to be an Aviation Cadet in 1942.

3. Assigned To The 8th Air Force

As part of the 363rd squadron, Bud was assigned to the 8th Air Force. They were tasked to escort the bombers during missions over Germany using their P-51s. However, he never agreed on how the P-51s were used.

He claimed that after Dolittle changed the mission plan for his squadron, the P-51s faired better against the Luftwaffe. Now, they didn’t have to quickly come back to escort the bombers, they had to engage the enemy and take them to the ground – pursue and destroy.

5. He Had A Knack For Shooting Down Planes

To be a triple ace, you needed to shoot down 15 enemy planes. Bud Anderson’s kill count is more than that. He shot down 16 1/4 from his two tours of combat in Europe against the Luftwaffe.

6. His Squadron Lost Half Its Pilots

When they came over to Europe, their squadron was composed of 28 young eager pilots. When their tour was over, exactly half of them were either killed or became prisoners of war. Anderson recalls being sad after coming home and seeing an empty bunk in their huts. “Each guy had to figure out how to cope with that”, he said.

7. Their Claim To Fame

They were known to be the fastest squadron to shoot down more enemy planes quicker than anybody. For each 1 squadronmate lost, they shot down 5 more planes. By May of 1944, they have already crippled Germany’s factories and enabled the infantry to go in.

8. War Has Its Costs

Bud talks about his best friend who was a fellow pilot in his squadron. Before going overseas to fight over Europe, the young pilot got married thinking he’d come back and enjoy his life as a husband to his loving wife. Luck wasn’t on his side during his 5th mission where he was shot down and killed. His wife was only notified of his death via telegram.

After his return from Europe, he married Eleanor Cosby and had two children. He retired after 30 years of service in the US Air Force as a highly decorated Colonel. The best thing that ever happened to him, he said, was marrying his wife and raising a family.

In 2015, Bud Anderson was given a gift from the city of Auburn, California in recognition of his service and accomplishments. The Auburn Veterans Memorial dedicated a statue to Bud and his trusty P-51 Mustang, “Old Crow”.